Sing along to popular tunes by homegrown talents, from the comfort of your home with TGIF Music Station: SCCC x YES 933! Taking place on every first and third Friday of the month, the popular series of music showcases our favourite performing artistes and rising stars. Enjoy the highly energetic performances of Benjamin Hum, groove along to the harmonious vocals of StellaVee, and a melodious duet by Mediacorp artiste Desmond Ng, and Alfred Sim. Gather your friends and loved ones for a musical escapade that will hit all the right notes!

Lunchtime performance - 12:30pm
Benjamin Hum has always strongly believed that music is the only way to connect to every individual on this planet, which motivates and drives him to pursue this path fearlessly. With his great stage presence, charisma, and highly energetic performances each time, he has gradually captured people's hearts and gained supporters from the various places he has performed at. With an inviting and bubbly personality, Ben believes in the importance of spreading joy and happiness, with music as the main channel.

With many years of experience in stage performing, Ben is never too afraid to try anything relevant to the arts. With his long-term passion in music, he earned himself a position as a Top 2 finalist for Campus Superstar Season 2 in 2007 and 2nd runner up in Voice of Dester Season 1 in 2015. Recently he toured to Beijing alongside Kenn C as a backing vocalist for Azora Chin 尤长靖 in January 2020. With years of performing, and never-dying love for arts, he has an eye for perfection and aims to produce the best performances.

Evening performance - 8:00pm
Stella and Vee - the two who make up the dynamic duo StellaVee, are passionate individuals with an undying love for song writing and performance. Stella's gentle nature and Vee's relentless energy coupled with their many years of friendship, have made this partnership a match made in heaven.

In 2017, StellaVee rose to fame with their rendition of 'Stay With Me' after having their videos reposted on Taiwanese Media and Malaysian Media Social Media Sites breaking one million views in a matter of weeks. In November 2019, they released their first debut album titled《朋友说 A Friend Says》which has been critically acclaimed, with remarkable results across major music platforms. One of the originals《网兽Cyber Beast》was also selected as the theme song for Mediacorp Channel 8's drama《All Around You》. StellaVee's debut ticketed concert at Esplanade Annexe Studio titled《Say Whaaat?》which was also held in November 2019 saw over 300 fans sang their hearts out along with StellaVee!

Desmond Ng started singing professionally in 2009 and achieved Top 8 in a Taiwan singing and song writing competition in 2010. With his humble personality and fantastic vocals, he won a strong fan base. Ng took part in "The Getai Challenge" organised by Mediacorp in 2015. His heart-thumping performances during each stage of the competition not only thrilled the audience but also won him the championship, beating the rest of the contestants including established Getai industry veterans.

In 2016, Desmond began his acting career and acted in three drama series in the same year. He held his first music showcase with his band AL4HA on 11 November 2018, drawing a fantastic turnout which included fans, media and celebrities. The band was invited to take the stage at the Esplanade Outdoor Theatre for Huayi – Chinese Festival of Arts in February 2019. He represented Singapore in the competition organized by Voice of Vietnam in July 2019 and achieved the Most Potential Award at ASEAN+3 Song Contest 2019 held in Vietnam.

Alfred signed on with Mediacorp after winning reality program Project Superstar 2014, and is now working together with Cross Ratio Entertainment for his music career, taking his passion for music further.

Alfred has since released his debut self-titled EP in January 2016, which conceptualises his versatility in portraying different styles and vocal techniques, churning slow rock ballads to other tracks complementing the rock genre. The album also includes a sweet love duet with his spouse, singer-songwriter Tay Kewei, which is their first ever collaboration.

He held his solo rock concert at Esplanade Annexe Studio in 2017. Alfred has been involved in past performances such as the ExxonMobil: Concert in the Park 2016, CHINGAY 2017 Theme Song 'Rainbow in Our Hearts' and also performed and represented Singapore at various international stages such as China-ASEAN Friendship Concert 2016 at Hainan International Convention and Exhibition Centre, Hong Kong Asian-Pop Music Festival 2017 at the Hong Kong Convention and Exhibition Centre where he won the 'Best Stage Performance' award. He recently attended the KL Jamm Festival 2019 held in MITEC Kuala Lumpur. 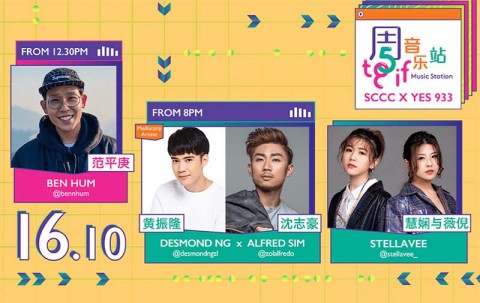