Cuturi Gallery is delighted to present Sneaky Treasures, a solo exhibition by French artist Idir Davaine (b. 1990, France). Adopting a seemingly playful and intuitive approach, Davaine returns with his polychromatic palette, coupled with his latest exploration of liberating forms in this series of nine paintings across canvas and paper.

Drawing inspiration from the environments we inhabit, Davaine wanders around with a camera in hand, spontaneously taking snapshots of everyday life. The artist has amassed a collection of visuals, of what could be said to be a constellation of different time and space continuums. As certain silhouettes start to emerge from this imagery, Davaine isolates and extracts various shapes and forms belonging to familiar elements, such as plants and trees, incorporating them into his paintings. This fragmented imagery goes through a process of manipulation, leading to the emergence of distorted forms taking on open and fluid qualities that play on a sense of unusual familiarity. Davaine's painterly gestures of freeing such forms from their materialities, straddles between the real and the illusory, playing with our perceptions.

In working towards the composition of his paintings, Davaine amalgamates the fragmented and distorted elements painted. Each canvas then bears an assemblage of shapes and forms, decisively manipulated and dispersed to produce a visual composition that hints at storytelling and narrative. Such process sees Davaine's conscious reiteration of manipulation in his approach that not only challenges, but also plays with our perceptible realities. By creating his own imaginary world, the artist invites viewers to participate in a game of visual deception, so as to uncover and interpret the hidden narratives behind his paintings.

Working with acrylic, Davaine interlocks a multitude of colours, where the viewer can easily find more than ten colours within each canvas. Each colour corresponds to a particular intention on the part of the artist, towards constructing a narrative. As with the nature of Davaine's works, the painting demands time and effort of the viewer, where we see anthropomorphic forms beginning to emerge amidst the aggregation of manipulated shapes. Such reading of the earthly paradise is anchored by a purple silhouette bearing undulated waves, alike the slithering of a snake. While this interplay between the shapes and colour could coalesce to form such a narrative, Davaine still leaves much to the imagination of the viewer with the openness of his paintings.

Together, Davaine's paintings point to an illusory of the real. He invites viewers to locate and identify various elements from his paintings, towards unravelling and constructing the narratives behind them on their own terms. 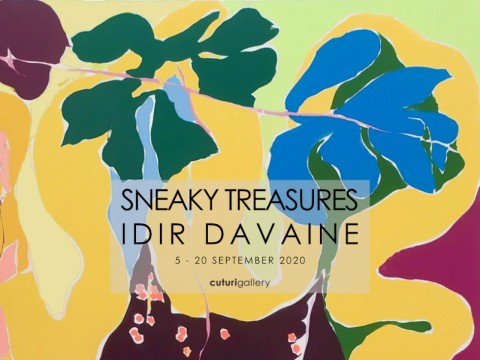