Read in Malay with accompanying Malay text and English sur-titles.

Due to limitations of the digital platform, the session is to be viewed on laptop/desktop only.

The world may be polarised but what we can all agree on, is that regardless of which camp we are in, Alfian Sa'at is everyone's beloved critic and most importantly, playwright.

It's undeniable what Alfian offers, evident from the numerous awards that he has won and from the number of sold out performances that his plays garner - regardless of its language, subject matter, be it in W!ld Rice, or Teater Ekamatra.

Rightly so, Alfian's observations about the world and the communities he is part of are sensitive, critical and astute. The worlds that he creates for his characters are never an easy terrain to navigate. His characters are often complex and we often see a bit of ourselves in them — be it our worries, our insecurities or our strength.

More importantly for us, Alfian's writing for the Malay theatre is smart in the way he reverses and subverts the colonial gaze that has been imposed on our shared history and narratives. It tackles, unpacks, and offers a different route into finding our place in society and the nation state. Undoubtedly, there is no other Malay playwright comparable to him.

To wrap up the final edition of the baca skrip:#_, which coincidentally falls on the Merdeka month for Singapore and Malaysia, we look at one of Alfian's earlier works, Causeway. Written at a tender age of 21, this work won him a Commendation Award by the Malay Language Council in 1998.

Causeway explores the relationship between Singaporeans and their closest neighbour, Malaysia. Consisting of eight chapters performed by an ensemble cast of seven, the play takes the audience on a tour of common histories and shared pop culture. A traffic jam on a Causeway forms the backdrop to various conflicts. Hang Nadim from Singapore meets with Mahsuri from Langkawi, both victims of injustice. The trauma of separation is allegorised as physical severance. Two families at a game show turn mutual stereotyping into a sport. Playful, insightful and theatrical, Causeway attempts to construct a bridge that transcends the limiting frameworks of 'bilateral relations'. 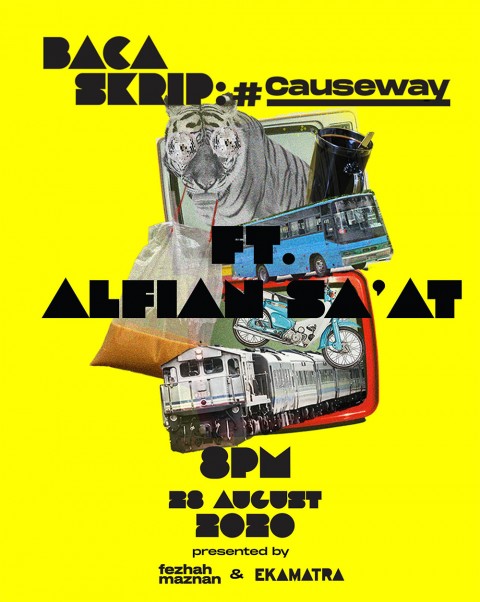