Organised by: Esplanade – Theatres on the Bay
Performed by: Sruti Respati & Friends (Indonesia)

Take a break from your lo-fi playlists and relax to the soothing sounds of keroncong. First performed at Pesta Raya – Malay Festival of Arts 2017, Sruti Respati's melodious voice, backed by a seven-piece ensemble, will take you on an aural trip to Solo.

Keroncong music today is widely considered to be an Indonesian music genre. Believed to have been brought to Indonesia by the Portuguese, the form combines Javanese and Western music traditions. The music itself went through a slow evolution of performance styles and configurations, before becoming the ukulele, guitar, violin, flute, cello and bass ensembles that we see today. In this performance, bask in the beautifully slow and stately tunes of keroncong gems from Solo, Indonesia.

In 2018, Sruti Respati released an album, Puspa Ayodya – A Tribute to Ki Nartosabdo. It included Ki Nartosabdo's songs with the current arrangement, revealing stories of love, happiness, sadness and longing. 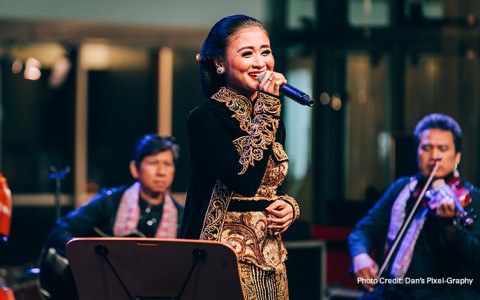