Special features: It's Not About The Numbers | SIFA 2021 | The Studios 2021 | SingLit | SgWritersFest
Theatre, Dance, Festival

An audaciously funny piece of dance-theatre, choreographer Crystal Pite and writer Jonathon Young present a stunningly original take on Nikolai Gogol's farcical play about deception and mistaken identity, taking apart the archetypal comic plot while deep-diving into the potent relationship between language and the body.

Hailed for her work with Nederlands Dans Theater, Paris Opera Ballet and The Royal Ballet of London, Crystal Pite is one of the most sought-after choreographers in dance today. As the artistic director of Vancouver-based dance company Kidd Pivot, she displays her knack for combining dance, visual arts and theatre to create dazzling productions.

Together with her long-time collaborator, theatre artist Jonathon Young, Pite takes audiences on an electrifying ride in this witty yet introspective adaptation of Nikolai Gogol's comedy of errors
from 1823, The Inspector General (Revizor in Russian).

Revisor begins with a quirky retelling of a mediocre and vain clerk who gets mistaken for a lofty government inspector by the residents of a corrupt little town, a tragic-comic blunder that leads to the self-preserving community's downfall. Eight Kidd Pivot dancers embody the foolish characters in Gogol's well-known satire, lip-syncing to Young's script and a recorded dialogue by some of Canada's finest actors. The physical comedy warps, loops and morphs with Pite's hypnotic choreography driven by a soundscape of text and haunting music.

Set against today's strange panorama of fake news and misinformation, Revisor reveals itself to be a strikingly timely work – a powerful narrative in movement told with panache by two of today's most daring artists. 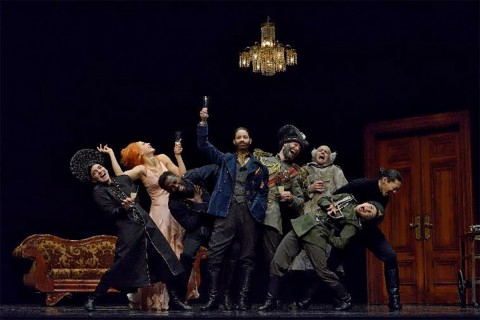