As The World Tipped

As the World Tipped arrives at an urgent time for climate change – performers act out a real-life disaster movie in the sky in this outdoor aerial theatre event.

Greeted with enthusiastic reviews from around the world, this extraordinary piece of aerial theatre arrives in Singapore at The Meadow, Gardens by the Bay. This exciting event is also a stunning piece of activism for one of the most urgent issues facing our planet – climate change.

The performance begins with a strangely familiar scene. At the Secretariat of the Copenhagen Climate Change Conference, chaos ensues as harassed staff fail to notice the world tipping towards environmental disaster.

Directed by Nigel Jamieson – best known for his large-event productions including Tin Symphony at the 2000 Sydney Olympic Games – along with Aerial and Technical Directors Wendy HeskethOgilvie and Jamie Ogilvie from Wired Aerial Theatre and produced by XTRAX, As the World Tipped takes the metaphor of 'lives dangling on a thread' as a reflection of the state of our planet.

Expect a genre-bending performance, combining dramatic film, visuals, dance, and aerial theatre as performers are suspended in the night sky.

Awesome and thought-provoking, come witness this fascinating live spectacle and enjoy an unusual evening out with family and friends. 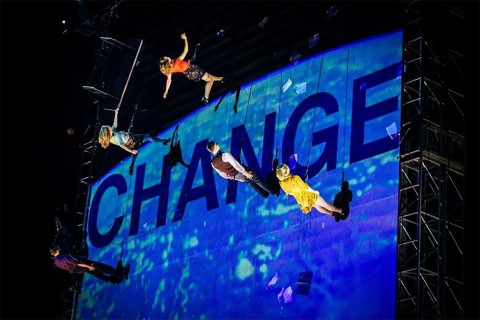