Andsoforth presents: Around the World in 80 Days

Audiences will get to travel back in time to the late 19th century and experience spectacular adventures on land, sea and air together with the English daredevil Phileas Fogg and his loyal French servant Passepourtout as Singapore's leading immersive theatre company, ANDSOFORTH presents a brand-new concept called Around the World in 80 Days.

Around the World in 80 Days, is ANDSOFORTH's seventh production, following sold out seasons such as Valhalla and the Chambers of Asgard and The Wonderland Cabaret. This new production will open on 2nd April and tickets are now on sale and can be purchased from https://www.andsoforth.com.sg/

This new immersive dining theatre experience is based on the adventure novel by the French writer Jules Verne, first published in 1872, in which the character Phileas Fogg of London and his newly employed French valet Passepartout attempt to circumnavigate the world in 80 days on a £20,000 wager set by his friends at the Reform Club.

This time around audiences will step into the world of the eccentric Mr Fogg's travel plans as he wagers a bet with the Minister of Finance to bring all the passengers (aka audience members) on his journey, and safely return them to the final checkpoint, or face bankruptcy and lose everything. The passengers must travel with him on four modes of transport while exploring and eating cuisines from five different continents.

The audiences' journey starts at the ticket box office of The Gaiety Theatre in 1868 London where the bet is conceived. Then seizing whatever transportation is at hand - boarding a large steam boat named General Grant, riding The Orient Express train through Hong Kong, confronting a hungry elephant in Calcutta, wondering the streets of Yokohama to finally landing in a circus in New York – audiences will travel through multiple uniquely designed rooms in the form of these exotic lands and dangerous locations, uncovering mysteries, overcoming tight situations and racing against the clock. All the while, they may be waylaid by the bumbling Inspector Fix, a Scotland Yard officer who believes, wrongly, that Fogg has stolen from a bank.

On their journey, audiences will engage with an energetic six-strong cast who enlist their assistance to help conjure up illusions and rise to challenges as they meet a train conductor, a ship captain, an aerial gymnasts who nimbly climbs ropes and fires up hot air balloons as well as the multilingual, and multifaceted service staff over the course of each performance.

While being immersed in a theatrical feast of stories and drama, audiences can expect a culinary overload in every sense of the word from all corners of the world as a 5-course dinner with a French and Japanese influence together with drinks pairing will be served by Dinner Presenters (service crew who are dressed up according to the country of each course). 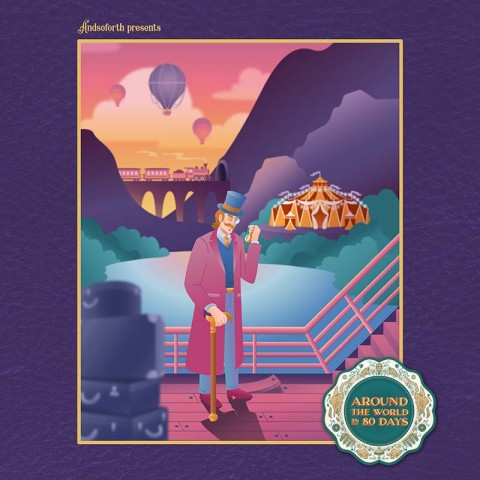