All proceeds from ticket sales will go to Project X.

ABOUT THE PROJECT
We got four spoken word poets to create new work inspired by and responding to four series of photos taken by four different sex workers.

These photographs are the result of months of work by sex workers, who each attended a series of photovoice workshops that trained them in photography techniques and narrative-building, and individually snapped hundreds of frames. The project is the collective effort of sex workers to reclaim narratives about themselves, narratives that have for too long foregrounded the punishing obsession with women's sex lives, and decided their moral worth.

ABOUT PROJECT X
Project X is a non-profit organisation that aims to advance the rights and representation of sex workers in Singapore. We educate sex workers about sexual health issues, provide befriender services and legal aid, bridge the communication gap between sex workers and the public, and offer opportunities for sex workers to build their personal capacities. We are currently raising funds for our new retirement programme, The Next Step, which will provide essential skill-building, mentoring, and support to sex workers who wish to leave the industry.

THE POETS
DEBORAH EMMANUEL
is a Singaporean poet, performer and professional speaker. As a slam poet, she has won competitions in Singapore, Germany and Australia. Her work has been privileged to be asked to the Barcelona International Poetry Festival, Q Berlin Questions and TEDx Singapore, and she has been invited as a resident to esteemed places like The Watermill Centre and Literarisches Colloquium Berlin. ​Deborah​ has written When I Giggle In My Sleep (2015), Rebel Rites (2016) and Genesis Visual Poetry Collection (2018). When not writing or performing poetry, she makes music with Mantravine, Wobology and Kiat, creates movement pieces, teaches workshops, paints/illustrates and devises independent theatre.

SHIVRAM GOPINATH
is a writer, spoken word performer, and twice-winning Singapore National Poetry Slam Champion. His poetry has been heard at the Singapore Writers Festival, Borobudur Writers and Cultural Festival, and Jaipur Literary Festival among others. His most recent work is Mein Shaayar to Nahin (I Am Not A Poet) - a collaborative project that combines spoken word and music from Tamil and Hindi cinema as a way of exploring the Indian experience

MELIZARANI T.SELVA
is a Malaysian writer and spoken word poet with notable performances at ZEE Jaipur Literature Festival and TEDxGateway Mumbai. Her first book titled 'Taboo' made Top 10 Best-Seller List on Malaysia's No.1 Online Bookstore (MPH). To date, her poems have been translated in French and Bahasa Malaysia. She recently co-published an anthology comprising of 100 poems by 61 poets from Malaysia titled 'When I Say Spoken, You Say Word!', and now, she co-runs the Malaysia National Poetry Slam.

WILLIAM BEALE
is an Australian-ish spoken word artist, "a boy howling his way into the world," and the author/composer of They Call Us Loud. His most recent collection, WAKEUPCITY, is centred on repression and growing up in Singapore. Organiser of the Malaysia National Poetry Slam, he was the recipient of Canada's Banff Centre for Arts & Creativity's 2017 Spoken Word masterclass, studying under Buddy Wakefield and Tanya Evanson. He represented Victoria in the Australian Poetry Slam 2016, performing in the Sydney Opera House, Singapore's Esplanade, George Town Literary Festival, Singapore Writers Festival, Ubud Writers Festival, White Night and more. As a convener and artistic producer, he is a Former Creative Producer of Slamalamadingdong (Melbourne) and Co-founder of If Walls Could Talk (Malaysia).

Please note: the event is 18 and up only. 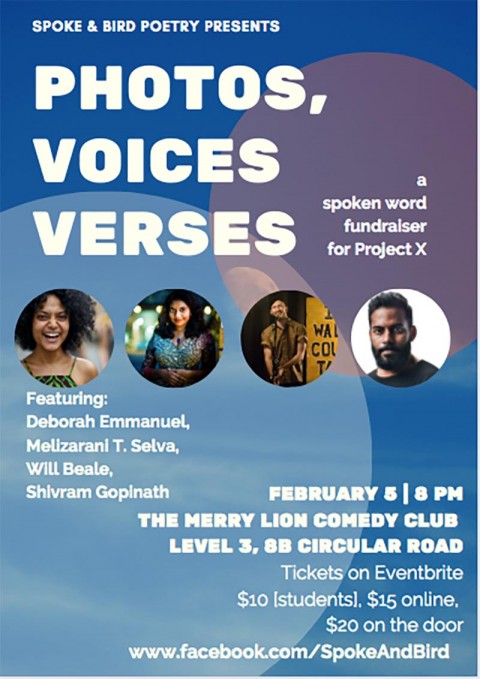