Organised by: The Substation

From the 1970s onwards, and more markedly after 1990, Southeast Asian artistic practices have engaged plural audiences in discourses about social issues. To ensure viewership beyond the elite confines of the art gallery; or, when institutional galleries are unreceptive to experimental art, practitioners have found alternative urban locations for their works: the street, shopping-malls, cemeteries, public transport, public housing void decks and walls, disused dwellings, religious buildings, and rooftops.

These installations, performances, sound-pieces, and murals have been created specifically for such unorthodox spaces, where the artists work within a locus' particular physical and symbolic attributes. Rather than as a mere stylistic endeavour, this site-specificity emerges from necessity, due to the dearth of exhibition venues, as well as a desire to activate art as incursion into public zones, physical, and sometimes intangible. These incursions may not always be tolerated by city officials and authorities.

The exhibition postures that public urban space is often a key component of art, with practitioners creating their pieces for urban locales where public visibility, exposure, and response are assured; Sutee Kunavichayanont's History Class (Indonesia version, 2016), installed at the foot of Bangkok's Democracy Monument is one example.

Stealing Public Space is part of The Substation's 2019/20 programme season, A Public Square. 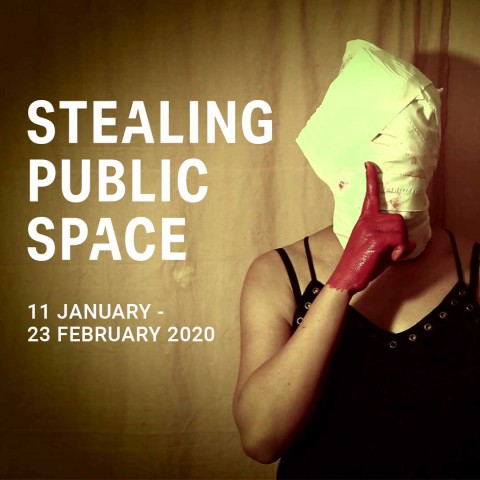