7 Sages of the Bamboo Grove 竹林七贤

Organised by: Esplanade – Theatres on the Bay
Performed by: Toy Factory Productions TOY肥料厂

This is a surveillance state.

The Organisation reigns supreme over the governance of the known world. Led by Cao Shuang, it controls the basic free will of all men using technology as its weapon—impelling everyone to wear a specially-programmed headset that instructs, controls and eavesdrops. A new law is implemented, forbidding artistic endeavours like music, entertainment, poetry or prose. Acts of disobedience lead to immediate arrest, imprisonment without trial, or worse—execution.

Everyone obeys, with the exception of The Organisation's arch-nemeses, seven revolutionaries who are artists by nature — Ji Kang, Ruan Ji, Shan Tao, Xiang Xiu, Liu Ling, Ruan Xian and Wang Rong. Placated neither by the lure of wealth nor the promise of power, their resistance soon captures the attention of their cagey government. Under the watchful eyes of The Organisation's Head of Surveillance, Ma Siyi, the painter loses possession of his brush, the poet is prohibited from writing, the dancer no longer moves freely and the musician is forbidden to compose. Unbeknownst to all, Ma is planning to wield absolute control over the entirety of human civilisation through body-implanted microchips.

Can the seven break free and liberate mankind from the grasp of The Organisation? In this dystopic era, can they trust each other enough to work together towards a common good?

Inspired by the real-life historical figures of the Seven Sages, this new and riveting work traces the artists' tireless and relentless search for the elusive bamboo grove, an oasis of freedom for humanity. Can the arts ultimately be the force that saves mankind? 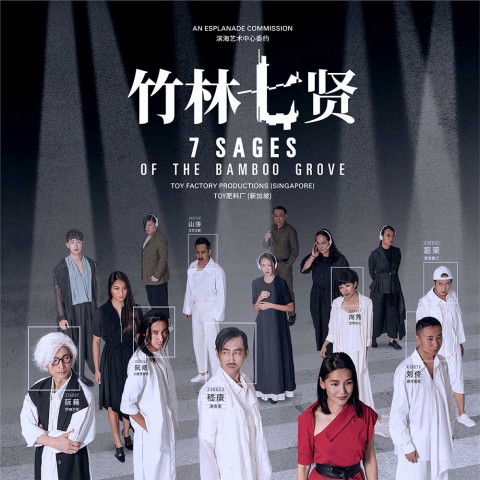