Before Bach, there was the early German Baroque composer Hieronymus Praetorius, who was responsible for most of the standard harmonization of Luther's German hymns (Vom Himmel hoch, Es ist ein Ros entsprungen, etc) and some of the Latin hymns (Puer nobis nascitur, In dulci jubilo, Quem pastores laudavere, etc) now found in hymnals of most English, German, Dutch, Swedish, Norwegian, Danish, and Finnish churches.

Praetorius was the earliest to adapt the flashy Italian polychoral style to the German chorale, and his output shows a dazzling variety of creative scorings. His works, as often in Latin as in German, show an attempt at bridging the gap and finding common ground between Catholics and Protestants, and may be seen as an early attempt at musical œcumenism.

The singers will be joined by a particularly sumptuous array of instruments including consorts of recorders, lutes, viols, harpsichord, and organ, making for an unforgettable (and hummable) Christmas programme.

There will be a programme with full translations of the sung German and Latin texts, and Cappella Martialis will be using the pronunciation of Latin as used in North Germany circa 1620 A.D.

Admission is free, but a retiring collection will be taken toward the upkeep of the host church and defraying various concert expenses. Please register to help us plan ahead for ushers and programme printing arrangements.

Please note: there will be brief 10-minute pre-concert remarks explaining the background of the works being performed, at about 7:50 p.m. 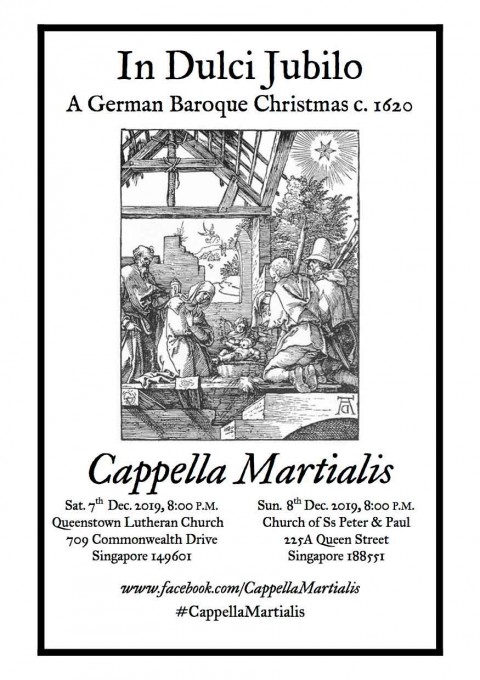