Singapore is in for a surprise this Christmas! British Theatre Playhouse and The British Club are set to bring from London, Clive Francis in his one-man presentation of A Christmas Carol, to be held in the Elizabeth Suite of The British Club from 13th to 15th December 2019.

This classic festive tale, written by the distinguished writer, Charles Dickens, (Oliver Twist, David Copperfield, A Tale of Two Cities, to name but a few!) features the miserly, misanthropic, Ebenezer Scrooge. The character is brought to life in this highly-acclaimed performance by stage, television and film actor Clive Francis - Seen in several films like A Clockwork Orange, The Voyage of Doctor Dolittle and most recently as Lord Salisbury in The Crown.

Ebenezer Scrooge is a cold-hearted miser who despises Christmas, and all that it stands for. A squeezing, wrenching, grasping, covetous old sinner! But on Christmas Eve, he is visited by the ghost of his old business partner, Jacob Marley, who warns him that in order to repent his wicked ways, Scrooge will be visited by three spirits; the ghosts of Christmas Past, Present and Future. What follows is a nightmarish journey of discovery.

Visit http://britishtheatreplayhouse.com/ to get your tickets now! 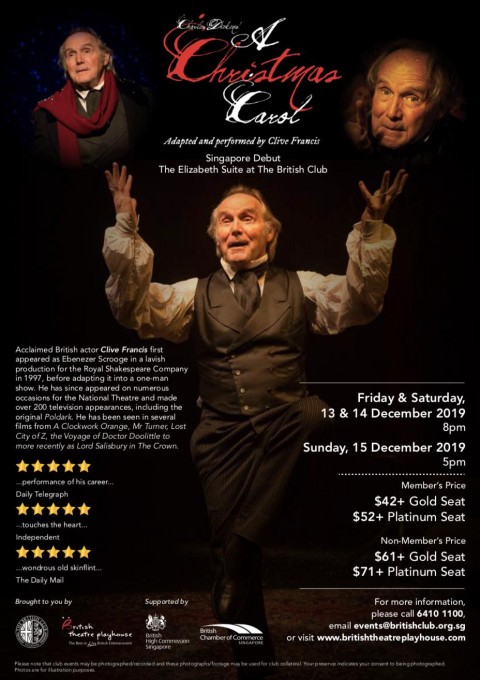