The Lesson: A Workshop

Are you interested in participatory work? Would you like to understand how pedagogy plays a part in art making?

Using "The Lesson", Drama Box's best-known participatory theatre as a case study, Kok Heng Leun will lead participants through an experiential encounter of the piece, before launching into a discussion, including critical reflections on the aforementioned segment and sharing of the different dramaturgies of participatory works by Drama Box.

About "The Lesson"
In any place where land is limited, space – both physical and psychological – comes at a premium. "The Lesson" asks questions about the forces at work in shaping our space and if there is enough space for a shared heterotopias. The audience of "The Lesson" is presented with a scenario whereby the city has made plans for the development of an old housing estate. However, there is little space left, therefore an existing facility in the area must be demolished. What will stay and what will go? The audience enters this scenario and participates in the decision-making process.

First performed at the Singapore International Festival of Arts 2015 to critical acclaim, "The Lesson" was part of the trilogy "It Won't Be Too Long", lauded by local media as one of the best productions of 2015. It has since been restaged several times, and brought to international audiences in Taiwan, Macau and Rotterdam.

"The Lesson: A Workshop" is a Coordinates Project of Singapore Biennale 2019 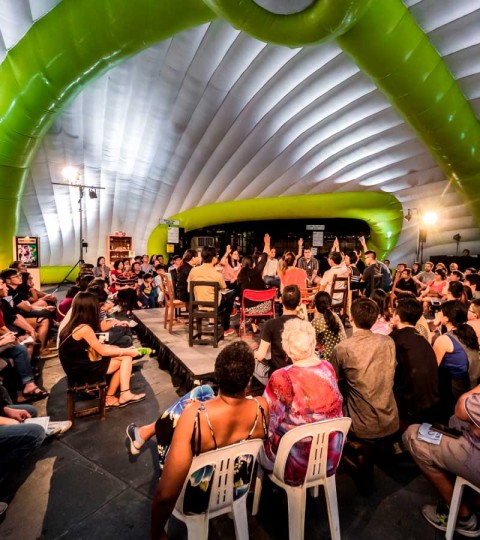