The Guitar Prasanna Trio makes its Kalaa Utsavam debut with a captivating fusion of musical ideas and energies!

Prasanna
A fearless innovator in contemporary music and yet steeped in the authentic carnatic tradition, Prasanna is a pioneer in performing carnatic music on an electric guitar. He has performed and recorded with multiple Grammy-winning artists including Esperanza Spalding, Victor Wooten and Joe Lovano. Besides Pandit Ravishankar and A.R. Rahman, Prasanna is the only other Indian composer to have scored the music for an Oscar-winning film. In 2003, he was presented with a Lifetime Achievement Award for carnatic music by H.H. Shri Jayendra Saraswathi.

Mohini Dey
One of the most well-known young bassists in the world, Mohini Dey has stunned the bass fraternity with her daredevil chops combined with exceptional musicianship. The Indian bass sensation has performed with an array of superstars from Steve Vai and A.R. Rahman, to Alex Lifeson of Rush and Zakir Hussain. 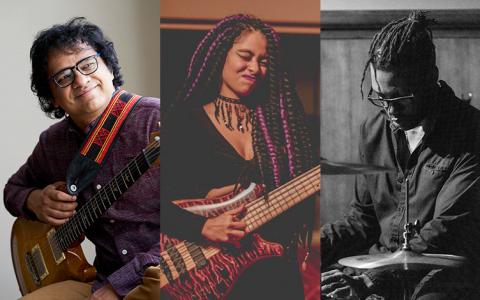