From Hard Boiled to Harlequin Romance - Genres in Improv

Genres (or literary/film styles) are a fun way to bring some spice to your improv - be it soap opera, detective or sci-fi. They have been a part of improv since the beginning, with many shortform games and longform formats using them as a inspiration. But sometimes they can be intimidating!

You may find yourself asking:

- How can you get the most out of using genres in improv?
- How can you fake a genre you don't know?
- Can you use your own favorite style?
- Does Everyone have to narrate whats going on in a detective scene?
- How can I get the hang of any genre for fun and profit?

Well wonder no more, as this workshop is packed full of fun activities and tips on unleashing the potential of all sorts of genres - from Shakespeare to Disney, from Horror to Children's show - as well as ways of improving your improvisation and challenging yourself!

Brad Daniels started performing improvisation in 1994 and has been working constantly in the field since then.

His roots are strongly in the Keith Johnstone "Loose Moose" school of improvisation, but he has taken on board a large number and variety of influences since he began training with Theatre Sports Queensland. He has studied with teachers such as Sean Tinley (Loose Moose), Patti Styles (Impro Melbourne), Keith Johnstone (Loose Moose), Sounds & Fury (LA), and many others.

In 2018 he directed and performed in two shows for the Anywhere Theatre Festival - "Show of Hands" - an improv variety puppet show, and "A Midsummer Night's Whatever" a improvised performance of :new works" by William Shakespeare which won a Anywhere Award as one of the best 10 shows in the festival.

In the last 17 years Brad and has appeared in and produced innumerable shows - with Theatresports Queensland, Six of the Best, Sit Down Comedy Club, Impromafia, and his own troupe EDGE Improv. 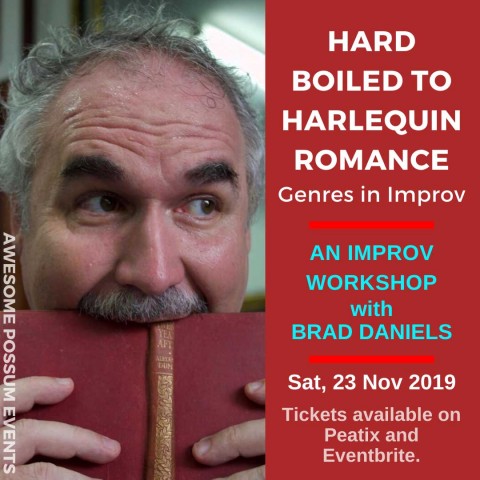