A collaborative effort led by Veshnu Narayanasamy, an artist in residence at Stamford Arts Centre for the Traditional Arts Residency 2019, Project transit: Echoes of Waterloo is an interdisciplinary exploration of cultural memories centred on the Waterloo Street area, a precinct where early migrants of different ethnicities and religions have partly left their mark, while much is also rapidly forgotten in the fast-changing urban milieu. The vocabulary created in this work is through a combination of various Asian dance techniques with the amalgamation of interactive theatre development.

Sights and sounds of the multicultural environment in everyday life today, along with personal recollections of the past, are interwoven with video projections, dance and body movements that serve to capture a pervasive sense of transience and impermanence despite a steadfast holding on to familiar rituals. The project has a troupe of 9 performers from a diversity of dance and drama background: Veshnu Narayanasamy, Beverly Yuen, Bernice Lee, Eleanor Ee, Lavanya Dave, Mumtaz Maricar, Neo Yan Zong, Subastian Tan and Xie Shangbin.

Project Transit: Echoes of Waterloo is a visual and audio treat to the mind and senses with a blend of traditional and contemporary dance and movements, re-choreographing of traditional work, multimedia images, ancient chants and modern tunes. The characters and chorus recite and dance to localized dialogues which tell the story of a place we call "home" with a tint of humour.

Veshnu is an established professional performing artiste for over 30 years. Veshnu. He has performed in several Asian dance styles, (Bharatanatyam, Odissi, Joget and Terinai) and trained in martial arts (Kalaripayattu, Silat, Tae Kwon Do) in Australia, Indonesia, India, Malaysia, New Zealand and Singapore. He holds a Post Graduate Diploma in Dance and a Masters in Dance degree from the University of Auckland. He has just started his PhD research in Anthropology at University of Auckland.

A consummate dancer, Veshnu is one of a very few Indian Classical dancers from Singapore to have achieved a high professional status in the art form. He has developed his kinetic skills both in the traditional genres of Bharathanatyam and Odissi, as well as in the innovative sphere of new dance vocabulary, to emerge not only as a dynamic and intelligent artist, but also as choreographer. His Bharata-Natyam and Odissi has a unique and vibrant style, which has evolved out of his perseverance in the search for artistic excellence. Having had his initial and foundation studies in Singapore, Veshnu furthered his training in India.

Parallel to his development in Indian classical dance is the involvement with contemporary Western dance and experimental research projects. He has choreographed and produced several full-length works for various dance companies, many of these works are a combination of multidisciplinary practices of dance, theatre and music.

Veshnu has won recognition for his artistry and professionalism with the Singapore Young Artist Award (1998) and with several project grants from the National Arts Council and Arts Fund.

Beverly Yuen (Dramaturg/Performer)
Beverly Yuen is the Artistic Director of Grain Performance & Research Lab, established in 2016. She obtained her Bachelor of Arts (Theatre Studies) from the National University of Singapore and a Masters and PhD in Communication Studies from the Nanyang Technological University.

In 1995, Beverly co-founded Theatre OX with Ang Gey Pin and a couple of theatre practitioners, and was a full-time performer with the troupe from 1995 to 1999. In 1998, together with Theatre OX, she headed to the Workcenter of Jerzy Grotowski and Thomas Richards (Italy) and received intensive performer training for a year.

Beverly founded In Source Theatre (IST) in 2001 and was its Artistic Director from 2001 to 2013. With IST, she produced, created, performed and marketed more than 20 original works locally and internationally. From 2005 to 2008, Beverly spearheaded the practice-oriented research project Defining "Spiritual Theatre": a Cross-cultural Study of Rituals and Traditional Body Forms in Singapore funded by a Research and Development Grant awarded by the National Arts Council.

WONG Chee Meng holds a PhD in Heritage Studies from the Brandenburg Technological University Cottbus (Germany), with a thesis on intangible heritage and intercultural dialogue. His case study concerned the practice of Indian classical dance in Singapore's multi-ethnic society, which he had personally been involved in previously, mainly as an arts manager with the Bhaskar's Arts Academy, which had long been functioning in Stamford Arts Centre until 2016 to make way for a revamp. He was also a research writer for A Quest for Dance: The Life and Times of Singapore Dance Pioneer K.P. Bhaskar, published in 2015 as memoirs of the late founder of the Academy, established during Singapore's pre-independence days of the 1950s.

Following the completion of his PhD, he did a postdoctoral fellowship in literary and cultural studies with the Nanyang Technological University from 2014 to 2016, when he also lectured in Chinese film studies and Chinese cultural history, reconnecting with his pursuit in Chinese studies dating back to a bachelor of arts from the National University of Singapore. Continuing as a visiting research fellow at NTU, he has been involved in various research projects on intangible heritage, partly supported by the National Heritage Board. He has meantime also published journal articles on Chinese fiction of the Qing dynasty from the perspective of comparative literature, as well as cultural heritage of Chinatown in Singapore. His ongoing research interests concern the intersections between tangible and intangible aspects of cultural heritage or cultural memory in a multi-ethnic society.

On a more personal front, he has long abandoned his dream of training for a solo performance of a traditional repertoire in Bharatanatyam, as years of academic pursuit and related work drained his energy and the dabbling in foreign art forms overseas such as flamenco decentred his focus. He still practises Carnatic music as a hobby. 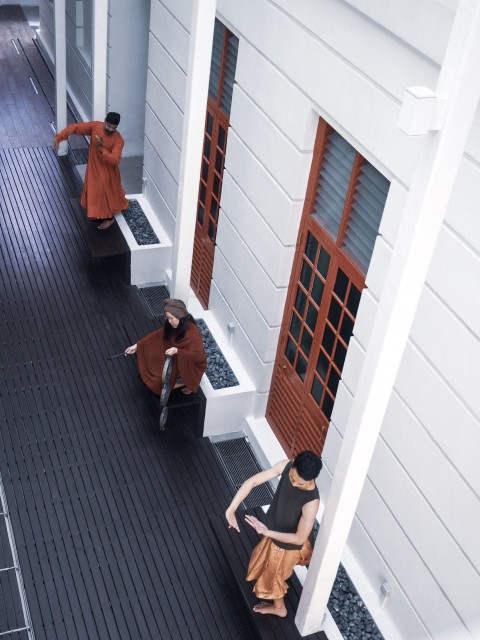