Organised by: Esplanade - Theatres on the Bay
Performed by: Hofesh Shechter Company (UK)

"An epic fresco of body and emotion... Hofesh Shechter is the king of dramatic contrast"
La Croix

★★★★
"a wild waltz for the end of time ... (Grand Finale) ranks among Shechter's most sophisticated creations"
The Guardian

Internationally celebrated choreographer Hofesh Shechter's latest work for Hofesh Shechter Company, Grand Finale, is a spectacularly bold and ambitious piece featuring 10 dancers and a live band of musicians. The work will make its Singapore debut, with the company returning to the Esplanade stage since their last performance here in 2011. Grand Finale is at once comic, bleak and beautiful, evoking a world at odds with itself, full of anarchic energy and violent comedy. Filtering this irrepressible spirit, Shechter creates a vision of a world in freefall—part gig, part dance, part theatre, and wholly original.

It would be impossible to miss the fact that Grand Finale reflects the uncertainty and confusion of the troubled times we are living in. Shechter captures a sense of helplessness and a macabre mood of crisis, but also the regenerative promise of chaos. The 10 dancers are a vision of a post-apocalyptic society. They pulse through kaleidoscopic formations as one body, one tribe, separating briefly for moments of fervent celebration, individual anguish, tenderness, and rag-doll collapse.

This portrait of the struggle of the human spirit against apocalypse is intensely cathartic. Shechter leads us ultimately past despair to euphoric release, and a collective sense of having undertaken a monumental journey together.

Shechter is recognised as one of the most exciting artists working today, renowned for composing atmospheric musical scores to complement the unique physicality of his movement. Based in the UK, but playing on major stages throughout the world, Hofesh Shechter Company is a boundary-breaking dance company that produces exceptional work created by Hofesh Shechter, with at their core a diverse tribe of extraordinary international dancers.

Produced by Hofesh Shechter Company and commissioned by Georgia Rosengarten.

Grand Finale is generously supported by the International Music and Art Foundation. 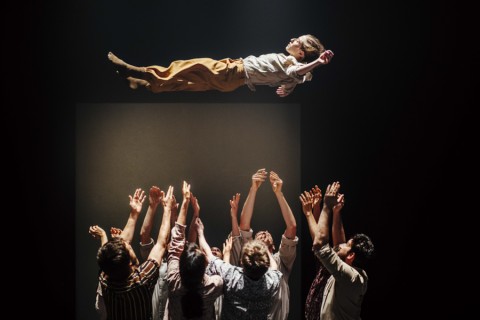