This free admission concert is an initiative by the the Embassy of the Federal Republic of Germany in Singapore in partnership with the Nuremberg Symphony Orchestra and the Yong Siew Toh Conservatory of Music.

Held in conjunction with SBG160.

Singapore's wunderkind conductor Kahchun Wong returns with principal musicians of the Nuremberg Symphony Orchestra to lead the Yong Siew Toh Conservatory Orchestra of his alma mater in this second Beethoven im Garten concert. Bring your picnic mats and let Wong take you on a country walk with Beethoven and experience music and nature on a high note!

Celebrating German-Singaporean friendship, Beethoven im Garten is a gift of music from the German people to all Singaporeans presented by the German embassy in Singapore in partnership with the Nuremberg Symphony Orchestra and the Yong Siew Toh Conservatory of Music.

Wong startled the music world by being the first Asian to win the Gustav Mahler Competition in 2016 which catapulted him into the top ranks of the orchestral scene. Appointed the Chief Conductor of the Nuremberg Symphony Orchestra from the 2018/2019 season, he has since debuted with the prestigious New York Philharmonic and the Los Angeles Philharmonic, as well as led major European and Asian orchestras including the Czech Philharmonic, the Berlin Konzerthaus, Tokyo Philharmonic, China Symphony and the Singapore Symphony. 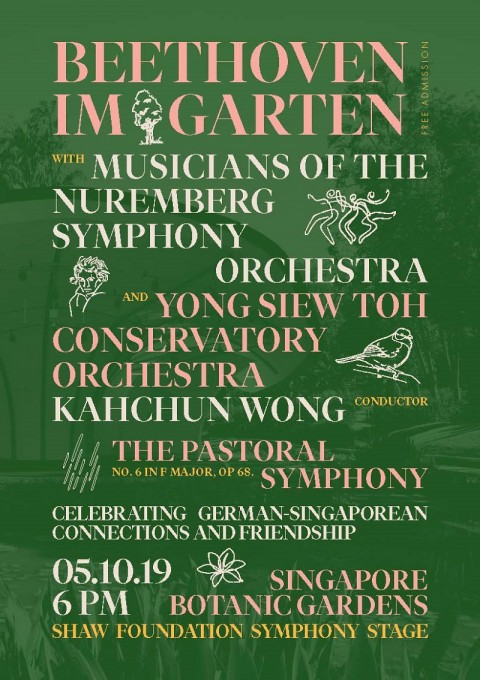