Maryanto: A Journey of Forking Paths

Yeo Workshop is pleased to announce A Journey of Forking Paths, Maryanto's third solo exhibition with the gallery, featuring latest monochromatic canvas and paper works by the Yogyakarta-based artist.

Hauntingly dark yet sublime, Maryanto's typical oeuvre depicts landscapes with dualities of once idyllic spaces that have been corrupted by systems of power. The landscapes are rendered beautiful and sweeping by the artist, but in reality are inspired from exploited geographies. The title of the show came about as Maryanto found the image of a forking path apt, in illustrating the duality he encounters in his thought process when looking at an interesting landscape. He is faced with the stories the landscape has to tell of its past, and imagine its uncertain future of preservation or destruction. The metaphor of the forking path also points to how these landscapes are not eternal, and is affected by every decision we make, every path we choose. As such, the title of the show is a premise to look at the scenes the artist has captured in his works, and he hopes to inspire the audience to reflect on the effects people have inflicted on the natural environment.

Maryanto captures these landscapes through a tedious method of layering and scratching, creating permanent images in the form of hyperrealistic paintings. Being process-focused, he patiently carves and etches fine lines and forms, gradually revealing the hidden images within the canvas covered in black acrylic paint. This show also features a large graphite drawing and a mural, where he explores depicting scenes with a different medium, but with equal intensity. In uncovering these images, he also uncovers stories of unspoken truths, bringing messages hidden in plain sight to light in these deeply dangerous and political spaces.

About the Artist
Maryanto (b.1977, Indonesia) creates evocative, black and white paintings, drawings, and installations that undermine the romantic language of traditional landscape painting to examine socio-political structures in the physical spaces that he depicts. Through fable-like and theatrical settings, these landscapes are subjected to the whims of colonisers and capitalists through technological development, industrialisation, pollution of the land and exploitation of its natural resources.

Maryanto graduated from the Faculty of Fine Art, Indonesia Institute of the Art, Yogyakarta in 2005, and completed a residency at the Rijksakademie in Amsterdam in 2013. Maryanto has recently presented solo exhibitions at Yeo Workshop, Singapore (2017 and 2015); Art Basel Hong Kong, Discoveries Section (2016); the Rijksakademie van Beeldende Kunsten, Amsterdam; ArtAffairs, Amsterdam; and Heden, Denhaag (2013). He has also recently participated in notable group exhibitions at the Koganei Art Spot Chateau, Tokyo (2018); the Samstag Museum of Art, Adelaide; the Asia Culture Centre, Gwangju; the Bozar Centre for Fine Arts, Brussels (2017); the Singapore Art Museum, Singapore (2015); and the Stedelijk Museum Bureau Amsterdam, Amsterdam (2013). Maryanto has also been featured at international biennials such as the 2nd Industrial Biennale, Labin, Croatia (2018); the Setouchi Triennale, Naoshima, Japan (2016); the Jakarta and Jogja Biennales, Indonesia (2015); and the Moscow Biennale, Moscow, Russia (2013). Maryanto lives and works in Yogyakarta. 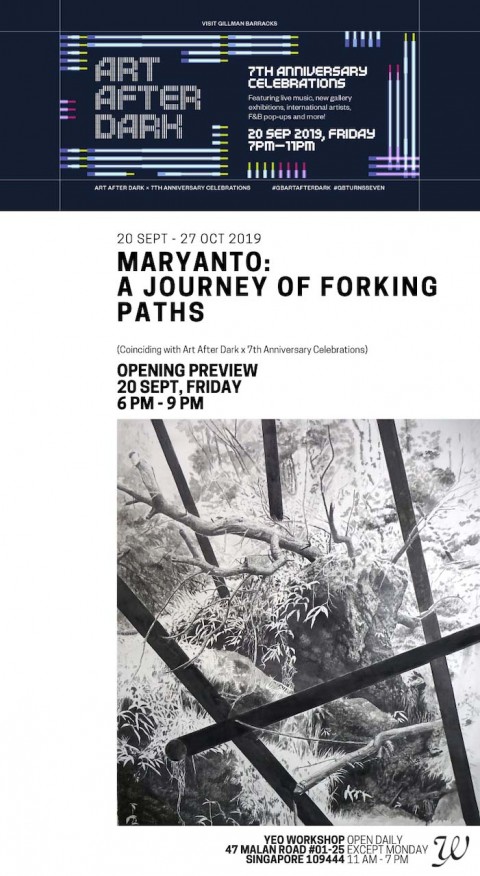