Come experience works reinterpreting Singapore theatre classics to performances that shine a spotlight on invisible narratives. Along with books from BooksActually to feed your soul and the Coffee Bandits food truck to fill your belly, join us for text-y times all night long at our historic blue house on Waterloo Street.

About Late-Night Texting
Late-Night Texting is held in conjunction with BrasBrasah.Bugis Precinct's Singapore Night Festival in August each year. Started in 2016, this annual project emerged from young artists wanting a platform to stage short performances that are fun for both performers and audiences. Late-Night Texting has since become a showcase of text-based works by emerging theatre groups, independent collectives and artists, reaching out to old and new audiences.

The Women Before Me by Zee Wong is a play that explores art and sexual assault. The read will be directed by Ellison Tan. This dramatised read will be the first time that this text will be presented to an audience after over two years of incubation.

Pretty Butch x 不男不女 by Tan Liting is a play about masculine people. Featuring five different characters who are neither manly or womanly enough, it takes a look at the pressures of society's gender expectations on everyday people. The script was developed over two years and made its debut in 2017. An updated version of the play was translated and presented in Mandarin at the Taipei Arts Festival the following year.

@thisisemeraldgirl is an adaption of Stella Kon's much-loved play Emily of Emerald Hill (1982). It combines new writing and multimedia with the iconic original text and imagines what life would be like for the titular matriarch's great granddaughter, a social media influencer living in Emily's mansion today. @thisisemeraldgirl was created by Eugene Koh, Lee Shu Yu, Sarah Amalina Bte Rosbe and performed by Brenda Tan.

Understudy is set 22 years after the events of Tan Tarn How's political satire Undercover (1993) where three spies from a National Intelligence Agency attempted to infiltrate a charitable organisation. The sequel sees the original characters reunite, each with a new protege in tow. Conceived by Robin Loon and written by seven writers from NUS Thespis.

Gossip GRLs is a farce that examines the support staff of Grassroots Leaders (GRLs), inspired by the political environment of Robert Yeo's One Year Back Home (1980). The performance follows the misadventures of a new volunteer joining the chaotic and competitive world of grassroots leadership. Gossip GRLs was conceived by the graduating cohort of NUS TS 2019: Cherie Ho, Chermaine Cham, Chimene Khoo, Michelle Simon Hariff and Tricia Ding.

Singapore Indian narratives take centre stage in Kitchen Masala, a series of 10-minute plays that feature stories about family and relationships centred on the Singaporean Indian identity inspired by the writers' own personal experiences.

Verso/Recto is a double-bill of performative responses to three poems by Southeast Asian writers. See how Main Tulis Group and Pink Gajah Theatre's distinctive styles breathe life into these works. The poems curated by BooksActually are A Few Ways To Eat The City Raw by Ko Ko Thett (Myanmar), The Spirit Catches You and You Fall Down by Lee Jing Jing (Singapore) and From Argentine Tango: Observations While Dancing (Part 6) by Mong-Lan (Vietnam)

Main Tulis Group is a writers' circle for Malay playwrights of various ages who create work in English and Malay, looking to produce more original writing for the stage. Birthed in 2016, they have called C42 their home base since. The writers presenting works at Late-Night Texting 2019 are Nabilah Said, Hazwan Norly, Adib Kosnan, Raimi Safari, Farhanah Diyanah and Nessa Anwar.

Dating Sim (Beta) is a participatory theatrical experience that takes the form of an interactive dating simulation game come to life, allowing the audience a closer examination of their agency and prejudices in modern dating and relationships.

ATTEMPTS is a collective founded by Rei Poh that aims to engage and provoke, transforming audience into players, using participatory performances while providing a playground for like-minded artists to come on board to play and create their journey. They first debuted in 2018 at the M1 Singapore Fringe Festival with Attempts: Singapore, a project developed in residence at Centre 42.

BooksActually is an independent bookstore specialising in Literature. This is their fourth year of partnership with Late-Night Texting. They will transform the C42 Library into The World's Loneliest Bookstore (WLB), presenting Singapore and Southeast Asian texts. Hear from WLB's owner herself, in a late-night story-telling session, about her journey as one of the 4,169 survivors left on earth after the freak solar flare decimated Earth's population.

Coffee Bandits is Singapore's only coffee specialty food truck. Besides coffee, they serve food and pride themselves on great service. They have been staunch supporters of Late Night Texting since its very first edition and will continue to refuel hungry audiences this year. 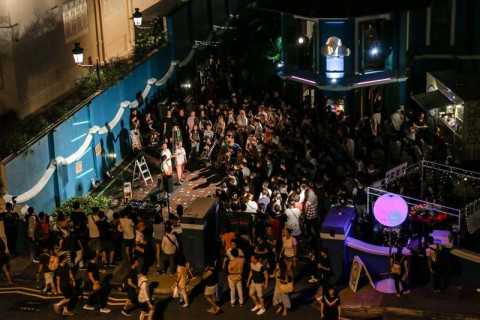