Currents by Than Sok

Richard Koh Fine Art (RKFA - SG) is pleased to announce Than Sok's (b.1984) first solo exhibition in Singapore. The exhibition is scheduled to run from 2 – 17 Aug 2019 at Richard Koh Fine Art Singapore and will feature 2 sets of works; 6 pairs of watercolour works and canvas paintings from his Kbach Teuk (Water Forms) series & 20 watercolour works from the Objects of Belief series that were exhibited in the seminal 2017 group exhibition; SUNSHOWER: Contemporary Art in Southeast Asia from 1980 to Today, at the Mori Art Museum, Japan.

Objects of Belief and Kbach Teuk are presented together in the solo show, Currents. The title is applied dually to register the different encounters each of the works have with the concept of time; Objects of Belief is a registering and recording of objects while Kbach Teuk revisits water forms as a method of reflection.

Than Sok utilizes a wide range of media in creating his work, including sculpture, installation, video and performance. Through his work, he considers religious and spiritual beliefs, rituals, karma and merit, the social roles of monks and artists, and the power structure in a society that contains all the aforementioned.

Objects of Belief is a documentation and sampling of various objects used in Theravada Buddhist pagodas of today's Cambodia. They include items that are indicative of syncretic practice, including Hinduism and animist beliefs that existed before Buddhism became the national religion and concurrently, items suggesting the influence of the cultural and economic diversity present in Cambodia today. At its core, the body of works reveals an important dialectic between the notion of belief and truth; that religious objects' materiality and ritual function, like language, change over time. Than Sok's research thus often concludes with no single truth but instead a variety of interpretations.

In Kbach Teuk, Than Sok works from both traditional stories such as the Jatakas and Reamker , which he studied its narrative and style on temple walls as part of his education with one of Cambodia's most esteemed female painters, Duong Saree , at Reyum Art School and his lived experience. Within this body of works, the artist draws reference from different narratives in ancient literature as well as his own personal memories of watching boat races with his father and when his village worked together to dig a new pond as a shared water source. While traditional representations of water in Cambodian painting have tended to be a secondary and complimentary subject to human and mythical characters' drama, the artist's study isolates water as the subject itself. As stated by Than Sok, "The ancient stories relate to today. For example, we are geographically divided by water, but water has the potential to bring us together." 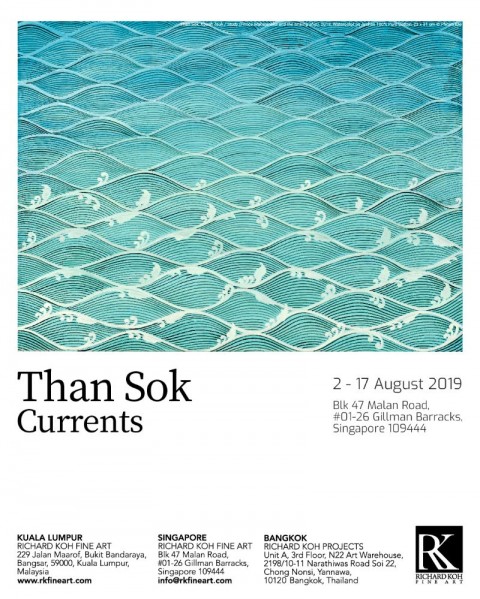