TheatreWorks presents a new three-week public project, N.O.W. 2019, as part of its Writers' Lab programme. From 2019–2021, N.O.W. is helmed by established actress and arts educator, Noorlinah Mohamed. As Artistic Director, Noorlinah has designed a three-year season focusing on women creators, thinkers, and change-makers, and the not ordinary work they do.

N.O.W. is interdisciplinary. Its programmes include films, performances, music, mixed-media installations, workshops, talks and demonstrations. They make visible and audible the conversations women from different disciplines have with each other and the world. With N.O.W., TheatreWorks aligns Writers' Lab, which historically began in playwriting, with the company's commitment to interdisciplinarity.

Noorlinah offers her direction and intentions for the three-week public project. "N.O.W. celebrates the multifaceted women of today and their voices. The range of programmes featured in N.O.W. privileges diversity and collaboration and conversations between disciplines. The programmes also highlight the unequal access to choices that people, not only women, experience. Women today are aware of barriers to access, such as contexts and cultural limitations, imbalances within power and economic structures as well as lack of education. They bring these concerns to the fore and make them more public. That's the shift we see today; women are speaking up and know that they can do something about the things that concern them."

N.O.W.'s women-centred focus is part of TheatreWorks 2019/2020 first women's season of theatre – Women & Voice – which spotlights women artists and their artistry and processes. The focus on women and their voices, concentrates not only on specificity, but also the duality and impact in society and the world. TheatreWorks' Women & Voice season began with Inch Chua. Noorlinah is the second artist to be featured for her work with N.O.W., followed by Akshita Nanda and Sharda Harrison.

About Writers' Lab
Conceived by Artistic Director Ong Keng Sen in 1990, the Writers' Lab has been pioneering in encouraging and developing Singapore playwriting with its varied as well as far-reaching programmes. The Writers' Lab aims to provide exceptional first-time and emerging playwrights with opportunities to hone their creative writing skills through an incubating environment.

In addition, The Writers' Lab also maintains its R&D profile by affording established writers and Writers' Lab alumni an enhanced environment to advance their new works.

Conceived as a mixed-media sculptural and performative installation, Apotropaic Texts dives into the use of protective magic, the various (mis)representations of the witch or the nenek kebayan as well as a slew of apotropaic defensive tactics historically used to scare attacking troops; keep dangerous animals at bay; and calm the elements. This exhibition draws largely from the artists' respective long-term research, practice and creative bodies of work on ritual magic, gender-based archetypes as well as the culturally nuanced principles of power, protection and sorcery. This work intends to be a space for other voices that have been cast out to return and create a collective chant of protest.

What is the power of brevity? Is letter writing an effective medium of advocacy as well as for raising awareness for change? Power of Letters exhibits letters written by women's rights advocates, from 1985 to the present. In exhibiting these letters, we invite all to engage with the issues and reflect on how they have affected policies as well as attitudes towards women in our society.

Three Fat Virgins Unassembled (3FVU), Ovidia Yu's critically acclaimed play written in the early 1990s, is re-assembled with some of the brightest talents in the media and theatre industry today. 3FVU is a pointed and hilarious critique, told by four women learning to accept themselves. Here, female identity is explored through work, education, marriage and parenthood, unveiling the uncertainties and difficulties they face at their workplace as well as at home. In re-staging for the contemporary audience, the question the cast and director Grace Kalaiselvi ask is: Have things changed for women? Are we still struggling with the same concerns? Do women of today have a different story to tell?

Nimita's Place is a story of two women, both named Nimita. Two generations apart, yet the two Nimitas face the same quandaries: Is history repeating itself? With the staged reading, director Edith Podesta navigates the real and the fictional by making audible the voices of the readers who have read the book. Weaving in verbatim texts with the book's narratives, the reader is brought into Nimita's world as another character. In doing so, the readers' connections with the characters and themes in Nimita's Place are revealed.

Fresh from Sharul Channa's 10-part comedy writing workshop, participants will finally debut as stand-up comedians in this exclusive performance night. Running for two nights, this open-mic style performance will be a safe space for all to kick back, relax and laugh. Hosted by Sharul herself, expect comedy that's authentic, fresh and raw.

4 Films
Film Programme 19 & 20 July
The film programme within N.O.W. spotlights women in film – from film directors, writers, producers, muses, directors of photography to set designers. For the 2019 edition, we feature film director and writer Wong Chen-Hsi, with a special screening of her award-winning film Innocents, alongside three other films.

Set in 1980s Singapore, Syafiqah enters a harsh institution, where she befriends a boy, Ah Huat. Misunderstood and bullied, both outcasts escape into their own world of fantasy and freedom – until tragedy strikes. Don't miss this award-winning coming-of-age story by Singaporean filmmaker Wong Chen-Hsi.

A Lonely Woman depicts the life of Irena, whose bleak life is turned upside down by a new love affair, but her hope for a new beginning still seems out of reach. This film was banned for years by the Polish government due to its criticism of Poland's societal hierarchies.

This film documents the fight for gender equality by three women in the Middle East. Set in Afghanistan, Syria, and Iraq, these women challenge the stereotypes of the veiled and silent Muslim woman. I Am The Revolution highlights the strength of women in the frontline, fighting for their rights.

Janina Duszejko is a seasoned animal-rights advocate who witnesses a series of murders in the Sudetes Mountains. But were these men killed by wild animals... or something else? Described as a 'feminist version of Django Unchained', this film by Polish auteur Agnieszka Holland is a must-watch.

6 Workshops
Workshops for the public and students

Sharul Channa's Stand-up Comedy Writing Workshop invites YOU, the one who has often been told that "you are funny", or "you can really crack us up". So if you wish to learn the skill of writing and performing a stand-up, join this 10-part workshop conducted by Sharul Channa, the only female professional stand-up comedian in Singapore. You'll learn how to write jokes in your own voice and perform on a live stage by the end of the course. Limited slots available.

What are the mythologies and contested histories of non-conforming bodies? How have the botanical and zoological been historically situated between the binaries of life and death, of magic and mayhem, of healing and killing, and of the demonised and desired? This workshop invites you to sift through ancestral knowledge, personal memory and public archives on healing and killing. Through the act of storytelling, ritual and gesture, you'll get to revisit these cross-cultural narratives and make your own apotropaic texts in response to them.

This 120-minute workshop invites participants to dig deep into the tradition of women protecting each other by creating texts to pass on to other women. Grounded in both mythology and history, this workshop will take you through the intimate process of creating a text that empowers you in times of danger.

Workshops related to Power of Letters

This workshop engages young minds to consider the process of writing for a cause. Through discussions and written exercises, participants will examine samples of published letters and analyse the art of persuasive and argumentative discourse. In doing so, they will reflect on the role of 'choice', 'diverse perspectives' and the place of public opinion in the public domain.

Do you have something to say about the news stories you read in the papers? Are you bothered by issues of injustice or inequality? Writing letters to the papers is one way to express your views. Join Constance Singam and Dana Lam, two established writers and women's rights activists, as they share strategies of getting your ideas across effectively, succinctly and powerfully.

3 Talks & Panel Discussions
With creatives and speakers from other industries.

In art and society, have our expressions of our place, role and desires changed over time? Where do we go from here? Bringing together the voices of artists, entrepreneurs and advocates together for a reflective start to the 3-week event.

What kind of trauma has been marked, carried upon and inherited by gendered and non-conforming bodies? What are some strategies of surviving – and thriving? In this panel, four women – poet Marylyn Tan, artist Zarina Muhammad, applied theatre practitioner Izzaty Ishak and dancer Hasyimah Harith – speak on the ways of facing danger and how magic – in the form of talismanic tools – have been used to carve out care, humour, justice and resistance across the multiple worlds they traverse.

Join three indefatigable women creators – Wong Chen-Hsi from film, Edith Podesta from theatre and Akshita Nanda from literature – as they share an afternoon unpacking their creative minds. What attracts them to create the way they do? How do they begin and when do they know their creation is completed? From bits of information that startle, sights and sounds that prick the imagination, to reflections born out of moments of solitude, these are sparks that begin the process of creation. Each share how they stoke the sub-conscious and awaken the unconscious to let the imagination run wild and thereafter tame to a sense of coherence.

Well of Silence
Written by Aswani Aswath
Directed by Grace Kalaiselvi
28 July, 11am

Plus
- 24-Hr Playwriting Competition at a secret location on 13 July till 14 July, 11am–11pm
- Showcase of merchandise and workshops by social entrepreneur Nasyitah Tan and Women of LOOMS 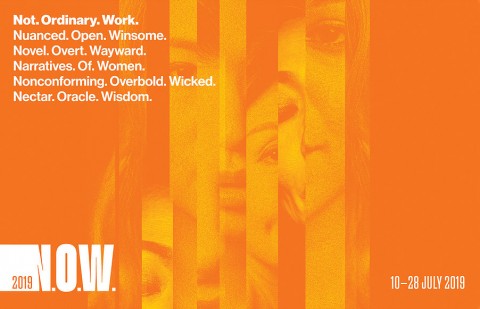