Organised by: Esplanade – Theatres on the Bay
Performed by: Kin Leonn

Last selling out his show at The Projector in 2018, Singapore-born London-based ambient music composer and producer Kin Leonn launches his debut album Commune at the Esplanade Recital Studio.

Blending piano with a spectrum of electronic sounds and effects, Kin Leonn creates an immersive sonic experience of atmospheric textures and soaring synth harmonies—recreating the emotional world of Commune. He also presents new never-heard-before material, allowing a glimpse into his creative growth as a composer since moving to London

In collaboration with KITCHEN. LABEL

About Kin Leonn
Affectionately known by peers as the "ambient boy from Singapore", Kin Leonn is a Singapore-born and currently London-based composer and producer. Heralding a new era of accomplished young musicians in Singapore, Kin Leonn's transportive music projects as founding member of electronic act midst and his genre-melding solo DJ sets have instituted him as an in-demand music presence in Singapore's thriving electronic underground.

2018 saw Kin Leonn releasing his debut solo album Commune on KITCHEN. LABEL with tracks from the album being featured on KEXP (USA) and BBC Radio (UK). Layering a hybrid of textural synthesis and organic compositions, Kin Leonn's compositions are often born of the piano, but continue to evolve into a non-linear interplay of synthesisers, guitar drones and techno excursions.

About Yeule
Yeule is a project created in 2012 by Nat Ćmiel. Yeule dives into the realm of theatrics, drawing out emotions based on an event or memory. Yeule touches on ideas of real life and virtual realities. With classical compositions drenched in electronic digitalisation, her sounds weave in and out of organic and manmade sound. Each composition is reflection of self, enigma and persona. 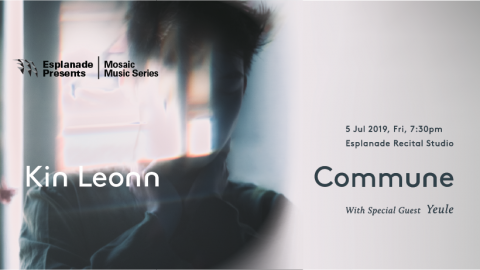