Viddsee Juree Awards ('Juree') is an annual industry pick award celebrating best short films from Singapore, Indonesia and the Philippines. This year's Juree Gold winner from Singapore will receive a Production Grant worth SGD$10,000 and an opportunity to work closely with Viddsee Studios throughout the making of the film. A 14-day loan of RED digital cinema camera and Zeiss lens equipment package worth USD$34,500 and a fully-sponsored trip to Los Angeles to participate in a 5-day Global Film & TV Program programme. Additional prizes for 10 finalists include a 12-month Creative Cloud All Apps subscription worth US$560 each from Adobe.

Submission details:
Deadline: 12 July 2019
Films can be from all genres: fiction, documentary, animation, and must be completed after 1st January 2017 till present.

More about Juree:
Viddsee Juree Awards ('Juree') is an annual industry pick award celebrating best short films from Singapore, Indonesia and the Philippines. In each edition, the countries' brightest talents and storytellers submit their films to a panel of international judges, who will then handpick the winning entries. Viddsee amplifies the out-of-competition entries and finalists to our audience communities. This year's judges are Tim Redford from Clermont-Ferrand Short Film Festival in France, Kattie Fan from ifva, the short film and media arts award in Hong Kong, and Singaporean film and television director, Sanif Olek. Juree is part of Viddsee's commitment to grow a network of prestigious storytellers, to support local film communities, and to inspire a new generation of storytellers across Asia. 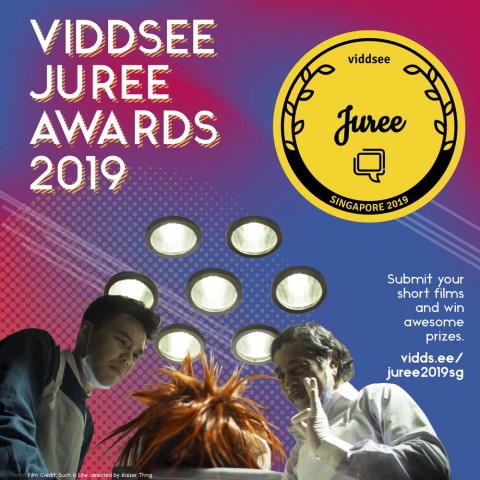