The Mixer: Rock and Jazz - a Mixing Workshop by HaveYouHertz

Another HaveYouHertz workshop! Hear from two of Singapore's own mixing engineers about how to create a good rock and jazz mix.

About this Event
In this mixing workshop, mixing engineers Wong Kai Wen from Soniwerkz Productions and Raf Soundwalker from Anadigi Sound Lab will cover:

- How to achieve good levels and balance

- Tips and tricks for working with your DAW

3 hours of solid content for mixing engineers and enthusiasts working towards a good sound for rock and jazz mixes!

About the Guest Instructors

Kai Wen is a producer and audio engineer known for his ability to craft unique sounds and hard-hitting mixes for clients. In recent years, has has worked with local bands Remnants, Seavision, Fader, Darah, Dante's Theory, among others. Constantly aiming to improve his craft, Kai Wen challenges himself to learn from the best mixing engineers around the world, and pushing the boundaries of what is possible in audio engineering.

An audio engineer with a proven track record in music production, recording, and post-production across Singapore, the UK, and Australia, Raf Soundwalker has engineered recording sessions and live shows for Snarky Puppy Tribute Band (Singapore), Druv Kent Live Show, Karen De Silva String Quartet, The Great Life Project, SingJazz Festival, to name a few. In recent years, he has produced for The Kevin Michael Project, local world fusion music ensemble Flame of the Forest, and more recently for the single and upcoming EP release for local singer songwriter Shak'thiya. He also taught as Lecturer of Audio Engineering in Orita Sinclair School of Design and Music.

Event is supported by the Lifelong Learning Council. 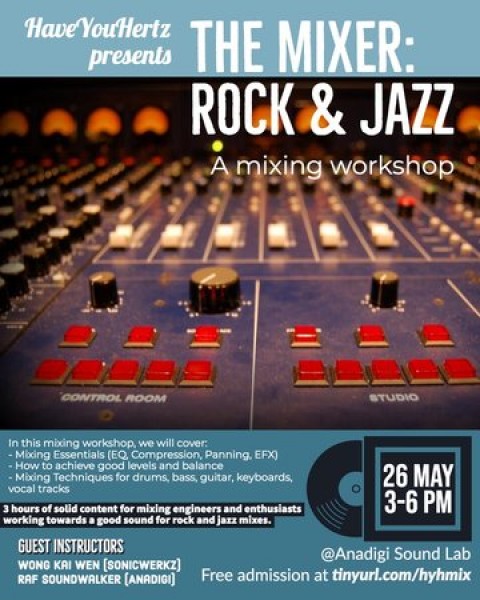