You were the last one at the office. You were
coming back home from a party. You were only
10 years old when it happened. He stared at
you throughout your commute and followed
you after. He was the friend taking you home.
He was your uncle. He. You.
You.

The stories are many but no two are the same. Inspired by true narratives and poems of Sarojini Naidu, Grace Kalaiselvi presents Goddesses Of Words.

Goddesses Of Words is a six-part play series exploring the poems of Indian female poets who write in English. This series will be presented at The Arts House and will feature the words of incredibly talented poets like Sarojini Naidu, Kamala Surayya, Zeb-Un-Nisa, Torru Dutt and two home-grown gems Pooja Nansi and Deborah Emmanuel. In this first edition of Goddesses of Words, our project focuses on the poems of the Nightingale of India, Sarojini Naidu.

10 of Sarojini Naidu's poems will be chosen to explore the connections between poetry and theatre. Through a devising process the team will be creating a new theatrical work that will include extracts from Sarojini Naidu's poems alongside the employment of text recitation, voice play and soundscape design coming together in a physical theatre creation. These will be intertwined with the personal experiences of the company involved in making the work. 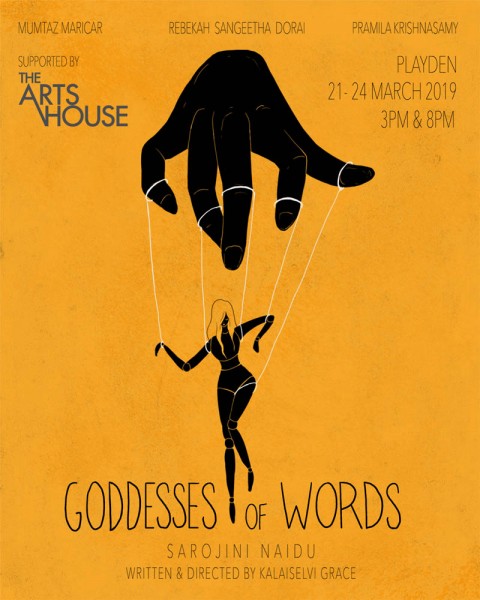