Late-Night Texting is back again! For the third year running, Centre 42 throws open its doors for two nights of text-based experiences. From sunset, come wander the grounds of this historic blue house on Waterloo Street and catch over 30 short plays by up-and-coming theatre collectives Ground Z-0, Dark Matter Theatrics, Main Tulis Group and The Second Breakfast Company. Stroll around to the back for a more literary experience with a pop-up store and programming by BooksActually. Don't forget to refuel for more texting adventures through the night at the Coffee Bandit food truck parked under the mango tree.

Lovebites by The Second Breakfast Company
What does it mean to love and be in love in Singapore? Have our ideas of love changed over time? "Lovebites" explores the love between friends, within the family, and between lovers as portrayed in four pairs of excerpts from Singaporean plays. In each set, one excerpt is from a play written before 2005, and the other, after 2005.

Set 4: Audience Choice
25 Aug | 10:00pm – 10:30pm | Black Box
The two most popular plays (voted via Instagram polls) from the earlier 3 sets will be performed. Details of the poll to follow soon.

ETA: 9MIN by Main Tulis Group
Seven playwrights of Main Tulis Group will present new original nine-minute plays in two recurring sessions. Whether you come for "Arrival" or "Departure", you'll be sampling an evocatively diverse range of perspectives in bite-sized dramatised readings. Performed in English and Malay with English surtitles.

Block 15D by Hazwan Norly
Zack and Rahmat are two strangers who meet at Block 15D. Two years later, they find each other again, and reconnect.

Jodoh by Zulfadli Rashid
Yusoff has a conversation with his father, Fadil, about life, loss and love. Performed in Malay with English surtitles.

Landing by Raimi Safari
On the 19th-storey landing of an HDB flat, two characters muster up the gumption to follow through with a hefty pact they had made. Performed in English.

Pelanggan by Farhanah Diyanah (FD)
A young salesman meets his old client for the last time. Performed in Malay with English surtitles.

Childhood Sweetheart by Nessa Anwar
Boy meets Girl. Boy likes Girl. Twenty years later, Boy is sentenced to death by hanging. Is Girl able to have one last conversation with her childhood sweetheart? Performed in English and Malay with English surtitles.

The Clean Up by Ahmad Musta'ain Bin Khamis
Datin Fauziah is willing to do what it takes to support her husband's political win. But how does the Permaisuri (Queen) of Parti PUKI (Persatuan Umum, Keluarga & Individu / United Public, Family & Individuals) feel when her husband sends Amber to help her with the clean up?

Eat My Shorts by Dark Matter Theatrics
Eat My Shorts is a presentation of one dozen 10-minute plays written by local playwrights. They will be performed by four actors over four sets. These short plays were selected from an open call based on the theme "short-sighted". Come enjoy bite-sized theatre in which the unofficial rule is "minimal fuss, maximum fun"!

Mayday! Mayday! by Isaac Lim
Dreams are for the longsighted people to pursue, but are we often short of paying attention to the true mental states of the people we dream for?

Strange Fruit by Christopher Fok
An art dealer and a buyer come to very strange conclusions about a work.

Holding Hands by Isaac Chong
A blind man, a deaf man, and a mute walk into a park.

Seeking Justice by Tan Kwan Boon
An online vigilante upholds justice for her friend but things did not go as planned.

Their Eyes Play Tricks In The Dark by Edward Eng
A play about how we forget things that frighten us.

Supermaid by Ng Swee San
When her mentor, a former superhero turned bureaucrat tries to retire her, Super Mermaid fights back.

Between Two Lives by Ivan Choong
Friendships that define growing up and coming of age.

The Devil You Don't Know by Zhenhua Lai
Sloth and Greed discuss who's been Pride's MVP for the era.

The Blesser Of Utensils by Christopher Fok
The Kitchen God cooks a dish of comfort food for a loved one.

Come As You Might Be by Xie Shi Min
A 15-year-old girl who almost fails out of school meets up with her future selves from parallel universes.

Night And Day by Kaylene Tan
Together for too long, a couple have a late night conversation.

Legends of the Islands by GroundZ-0
Singapore is not just one island, but made up of many, many islands! Legends of the Islands tells the stories of four of these islands. In a multilingual street wayang performance, three actors will tell you three different versions of these island legends. Whose story will you believe? Come, listen and vote! Performed in English, Malay, Mandarin and Hokkien. No surtitles provided.

Read to Teleport by BooksActually
Read to Teleport is a transportive tool that brings every reader to different worlds — made possible by the vast literature that the world owns today. This edition of Read to Teleport will have a pop-up store selling a range of books and magazines, new publication launches, and panels featuring local literary figures.

Fill Ya Belly by Coffee Bandits
Late-night texting is hard work, so don't forget to refuel throughout the night! A regular fixture at Late-Night Texting, the bright yellow Coffee Bandits food truck will once again be parked under our mango tree. Make out like a bandit and head on over to fill up on a delectable array of snacks and tipples.

The Second Breakfast Company is a youth-initiated theatre group that started in 2016. One of the tenets of The Second Breakfast Company is to stage local works in order to build a consciousness of the local canon. In the same way that international plays are read, staged and re-staged, the company hopes that the Singapore audience too will understand local works in the same way. Its second tenet is to support new works written and performed by young artists of their generation.

Main Tulis Group (translated literally as "Play Write Group") is a writers' circle for playwrights who create work in English and Malay. It is a safe space where Malay playwrights of various ages can meet to share their works-in-progress, exchange ideas and provide critique, with the view to produce more original writing for the stage. Centre 42 is the home of Main Tulis Group. Its current members are: Adib Kosnan, Ahmad Musta'ain, Farhanah Diyanah, Hazwan Norly, Nessa Anwar, Zulfadli Rashid (Big) and Raimi Safari.

Dark Matter Theatrics is a theatre collective interested in the uncommon in common stories. Founded by playwright-director Christopher Fok, actor Lian Sutton, and playwright Marcia Vanderstraaten, they search for the magic in the mundane, focusing on creating contemporary theatre that interests, inspires and invigorates the common folk. They aim to foster artistic development in the people involved in their productions with an emphasis on local playwrights. They also aim to create universality through specificity with the stories that come from the common folk, in hopes of giving voice to a generation of people who have much to say about the society and world they live in.

GroundZ-0 is a newly-formed multilingual experimental inter-space initiated by Zelda Tatiana Ng, which aims to explore, research, promote and produce intercultural and cross-genres/disciplines works in Singapore. GroundZ-0 is interested in the experimentation of traditional arts forms (especially Chinese Opera and Japanese Noh) in contemporary theatre. It also seeks opportunities to work with various international artists in order to share research and learn knowledge across nationalities, races and cultures. Through explorations and experiments, GroundZ-0 aspires to find, define and redefine the Singaporean and global identities.

BooksActually (est. 2005) is an independent bookstore specialising in Literature (including obscure and critical works). In their bookstore, you can often find literary trinkets in the form of stationery and other lovely tchotchkes. They publish and distribute books under their imprint Math Paper Press, and they also hand-stitch notebooks and produce stationery under Birds & Co.

Coffee Bandits is Singapore's only coffee specialty food truck. Besides coffee, they serve food and pride themselves on great service. This is the third year Coffee Bandits is partnering with Centre 42 for the Night Festival event; fuelling visitors with night bites, caffeine and alcohol to last the texting experiences. 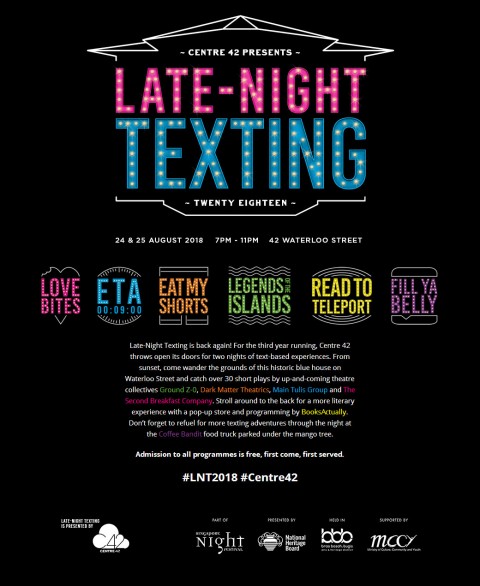