The 2016 NParks Concert Series in the Park: Rockestra™ was a blast! Join us for an equally exciting line-up in 2017!

The first "NParks Concert Series in the Park: Rockestra™" will be held on 11 March 2017 at Jurong Lake Gardens (Chinese Garden), Dragon Phoenix Court, in conjunction with the inaugural Jurong Arts & Music Fest (JAMfest) organised by Jurong GRC, Yuhua and Bukit Batok Grassroots Organisations. Youths will be familiar with the pop and rock tunes at the concert, while families will be able to enjoy the arts booths as well as other fringe activities. There will also be a "community zone" with representatives from arts-related Voluntary Welfare Organisations, Interest Groups and Social Enterprise Groups.

Hosted by Justin Misson (popularly known as "Warrant Lum" in local movie "Ah Boys to Men 3: Frogmen"), the concert will feature crowd favourites like 53A, Gentle Bones, Shirlyn & The UnXpected, and SuperSonic, and will introduce the finalists of JAMfest audition and RB1A.

Our next Concert Series in the Park: Rockestra will be at Fort Canning Park on 27 May 2017. 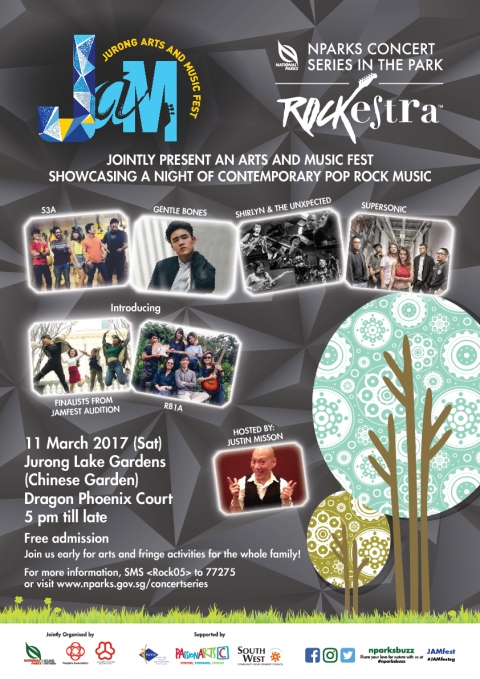