We have no idea what to expect for the show. All we have, is a message that tells us the direction to this secret location. So, QQ and I spend the afternoon finding our way to a refurbished warehouse, tucked away in an industrial estate. Our hearts are full of anticipation as we climb to the top floor. To our surprise, the door opens to reveal a restaurant! The soft glow of its interior makes a strong contrast against the sunny weather outside. The theatre is at the far end of the restarant; we had to say the passcode in order to get in.

Upon entering the theatre, audience can sit anywhere they like on the floor. The room is plastered with vibrant illustrations, vines and leaves climbing up the wall to the ceiling. A little enigmatic, a little peculiar. But the cacophony caused by the good turnout of audience drowns out the slight eeriness of the atmosphere.

There is a small stage at the front of the theatre. But unlike in many other theatre performances, the performers in Wonderland are free to roam around in the theatre space, and are not limited to the stage. This greatly reduces the gap between the performers and the audience. The performers weave in and out of the little doors in the partitions, adding to the theatrical effect. This appearing and exiting of characters during the show fascinates the young audience very much, often catching them by surprise, causing squeals of laughters.

The story starts with Alice and her two friends being invited to the Queen’s tea party. The twist in the plot happens when the Queen discovers her tarts have been stolen. Who did it? Who could be the theif? The story is understandably simple, since the show is meant for the children in the audience. The performers spot heavily-painted faces and gorgeous constumes to resemble Wonderland’s fantasical characters. The show is full of laughters, articulate dialogues, catchy sing-a-long songs, and interactive games. They have the young audience captivated and enchanted.

At the end of the show, we are invited to take pictures with the performers. This may sound trivial to the adults, but it means the world to the children! QQ is excited to be up close with the characters in the story once again so she waits patiently for her turn. She snaps a picture with everyone except for the Cat. (Find out why not here!) Many of the audience have gone over to the café side to have themselves a similar set of cake and milkshake as seen during the show, which is a lovely way to end the afternoon. Unfortunately, QQ and I are full from our lunch earlier, and could not manage tea. 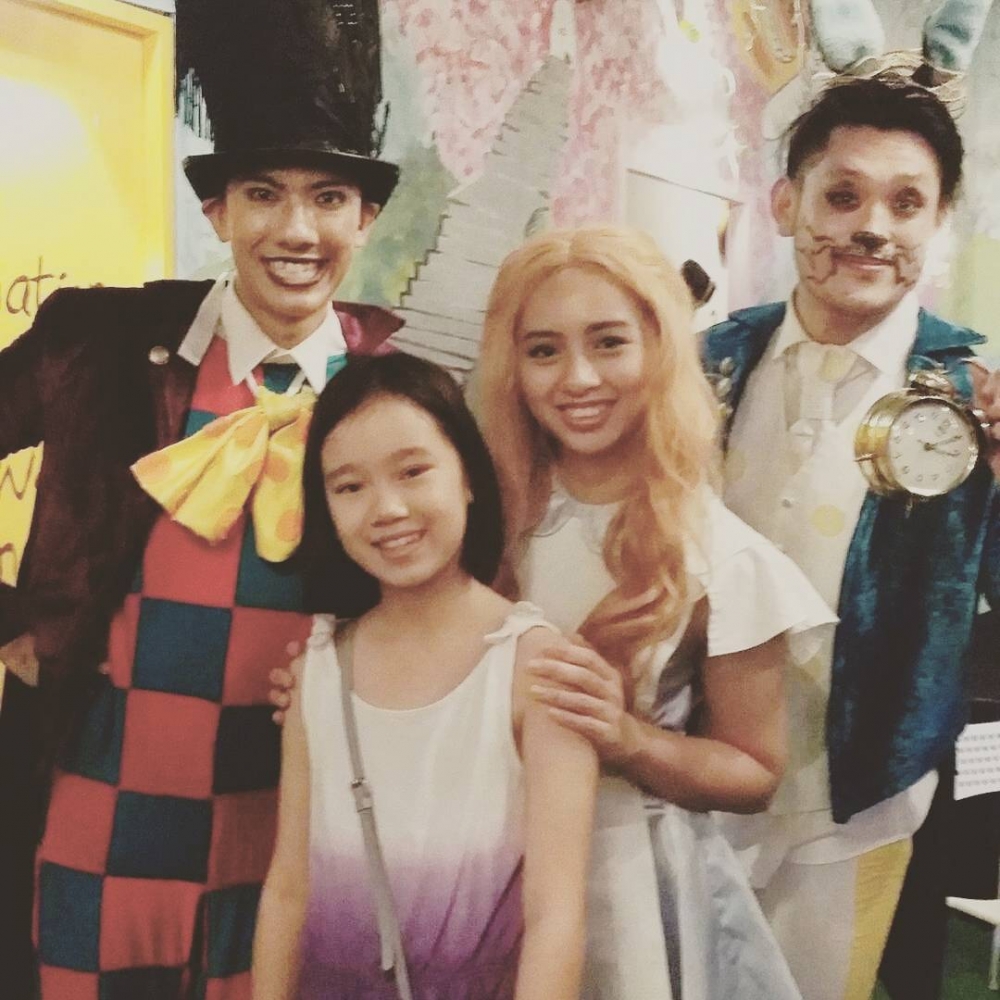 Wonderland by ANDSOFORTH Junior is an earnest production that will make an excellent entry-level performance for young audience who are just starting out to explore the performing arts scene. The dedication of the performers, the story flow and charming narration, all in all, makes the show great. I truly hope that there will be more variety of children’s theatre to allow children to be in touch with performing arts in their early years. Theatre could be an entertaining medium to nurture children’s interests in music, language, dance and other performing arts.

The Wonderland tea party must have left a beautiful impression in QQ’s memories; she hums the song on our way home: "There’s so much to dream, in Alice in the Wonderland…" Indeed, the closing song of Wonderland brings out the central theme of the show – that one should be brave enough to pursue one’s dreams, and to turn it into a reality.

The reviewer Sheenyit attended the show with her 10-year-old daughter QQ, and she wrote a review too! Read it here!