New Vision marks T.H.E Dance Company’s 5th anniversary celebrations. For such a young company, it has definitely made its own footprints on both the local and overseas dance scenes. As a frequent goer for T.H.E’s events, I met with the usual faces, but as a first time reviewer for the company I went in with trepidation and a little bit of apprehension. 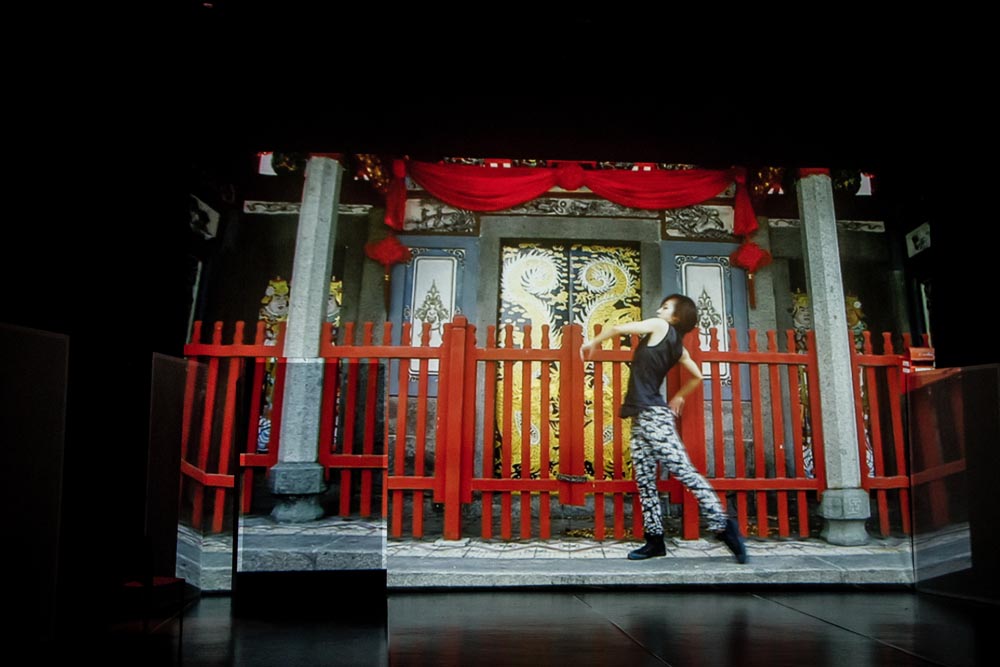 Alongside Kuik Swee Boon, artistic director and choreographer of the company, this evening’s works included that of Jeffrey Tan (Associate Artist) and Zhuo Zihao. It was also their Gala Opening Night, so the expectations were high.

As I scanned the stage, 10 white panels were placed in a diagonal fashion, with one of the panels jutting out of the wall, like a door. The dancer of the first item, Jessica Christina, walked in with a chair and sat down next to the door panel. It was the signal for the audience to settle down. An announcement informed the audience that the order of the items would be altered: They would start with Swee Boon’s item, followed by Jeffrey Tan’s and lastly Zhuo Zihao’s. I was wondering what brought about the change but as the lady next to me took out her pen and notepad, I was feeling the pressure to write a good review. There was a blackout and the dancer disappeared, leaving the stage empty and the projection started.

On top of white, choreographed by Kuik Swee Boon, is a dance entirely performed on video by Jessica. It started with her dancing at Stadium MRT Station, in a red dress, lying down on the escalator that was going up. The video showed different angles of her, dancing in the station and sometimes, featured her in stationary poses where her reflection could be seen on the signboards. There was a very nice window effect that played on shadowing as well.

The next scene was one where the more muted colors of the MRT station were contrasted by the vibrant colors of Little India. The dancer’s outfit has changed to a cooler hip-hop wear: high cut shoes, black tights and a sleeveless top. Jessica danced amongst the passersby as they went about their daily business, through various scenes of Singapore in the background. I liked the moment when Jessica’s jumps were in tune with the beat of the music. I received my answer to why there was a panel jutting out of the two walls. When the projection mapped exactly onto that panel, we could see Jessica spinning on top, with her hands and legs appearing and disappearing from view.

The construction site scene had me wondering if her movements were specially made to mimic those of the cranes behind, as they seemed to be moving in unison. The mechanical sound of the music further advocated this point while the cranes started moving as fluidly as Jessica did. The still moments provided a resting point for both the audience and the dancer in the video. Scenes from different places intertwined with one another. There was another projection of Jessica spinning on the extra panel and the video ended abruptly. The audience hesitated slightly before starting to clap.

Although I could see where Swee Boon wanted to take this piece to, I was wondering if there should have been more interaction between the different scenes. Maybe he could overlap thereal dancer, Jessica, with the virtual dancer on the screen. Also, I would have liked for the dancer to have a change of costumes at each of the different locations.

We waited a while as the crew changed the set for the next piece. The extra panel was pushed back into the wall, such that now there were two perfectly straight and diagonal walls on each side of the stage.

Command Pattern by Jeffrey Tan started, strongly, with four dancers on stage: three were in black, and one in all white. The lights flashed two strips of thick white lines, as would a scanner. The space and projection matched very well and it abode nicely for things to come. Black pixelated letters appeared, with the dancers in black merging with them and then, disappearing.

The dancer in all white, Lee Mun Wai, was left alone in the all white space, it felt a little like a prison cell. Was he lost in translation? Or lost in a sea of information? The use of the projectors on the floor as well as onto the wall divided the space equally, whereby Mun Wai would dance on the non-projected space and try to interact with the pixels on the other side. We could see him struggling, but at the same time, curious to know what is on the projected side. It felt like he wanted to get away from all of it, but he always felt drawn back to it.

We could feel the claustrophobic nature of the letters as they closed in on the dancer and there were some moments where he seemed to be playing with the letters in his hands. The scanner effect was shone again. All the letters converged towards the wall at one spot and became a shadow of a body. Mun Wai and the shadow started to dance in sync in robotic moves. The black people came back and mimicked the shadow’s moves.

It would have been better if the moves by Mun Wai and theshadow were more in sync. But it was by no means the fault of the dancer, whose execution was flawless. Jeffrey had a very effective move that had the dancer stepping backward and forward in the first position. The broken ballet lines worked well in this piece. It represented the type setting of the pixelated letters, with the dancers having fluid movements intercepted with mechanical ones.

Black and white stripes were created using the front lights, creating a locked space for the dancers, leaving a doorway with the shadow haunting him from behind. References to Alice in Wonderland came to mind, seeing Mun Wai in white, as the rabbit trying to find the correct doorway to run to. By the end of the dance, Mun Wai found himself having to work with the letters and finally drowning himself in them.

Overall, I felt that this piece by Jeffrey was a slightly more literal take on the ‘Man versus Technology’ theme. But for the younger audience, it would be a good dance to watch and understand, coupled with the fresh movements rarely seen performed by the T.H.E dancers, who did it fantastically.

The last piece, ‘Felt’ Sense by Zhuo Zihao, required the audience to wear 3D glasses. It also warned about the use of high pitched sounds that may be slightly disturbing to the ears. I would have liked that they informed us pre-performance so that I could have worn my contact lenses. I also had to warn my friend about the music as he had an ear condition recently and was a bit apprehensive about the music.

There were now six panels positioned in one horizontal row and the projection onto these panels felt like being in a cinema. The dancers appeared in front and behind the screen creating an overlay effect. The white panels served as gauze, can be seen through when light is shone behind them.

The superimposed pictures of the dancers with the real dancers created a mixed media effect that rooted further the question ofwhat is real? I felt a bit dizzy at times due to the 3D glasses along with the moving images, but particularly liked the part where they projected the scene from a house, near a window. The image of the dancer in the video would walk out of the scene and be live on stage. Then, he would walk back and reappear in the virtual world.

Some of the images were too blur and slightly disturbing to the eyes. Coupled with the music, it became slightly too much. There were also voices talking in the soundtrack that actually didn’t bother me because it added to the whole dance.

I really liked the part where the dancers could be seen running behind the screen while they were being projected virtually on the screen. The layering effect worked really well here. The transition of the dancers between the screen and the stage was very effective too.

The rock with all the hands running over it felt like a heart due to its shape. At times, it felt like a human face too. There was a ghostly feel to it, like something inhuman. It felt like touching a human face. The last few projections showed hands, feet and other parts of the body, ending with a zoom into the pupil of an eye.

I managed to catch Swee Boon after the show and we shared similar thought on how refreshing this show was compared to the previous ones, especially with the heavy use of projections and the focus on technology. I was also deeply humbled that such an established choreographer as Jeffrey Tan was eager to get my feedback on his piece and willing to learn from the audience. We agreed that his projections were not perfect match to his piece and the last minute changes he made to them right before the show helped to make the whole piece look much better.

All in all, it was a really enjoyable night of dance with three very distinct points of view. I could understand the last minute swap of the items as the new sequence gave the audience something to look forward to, a slow escalation to the end. What the artistic director has done here was to let the dance pieces speak for themselves while giving a frame for them with the panels. This is truly T.H.E Dance Company’s New Vision. 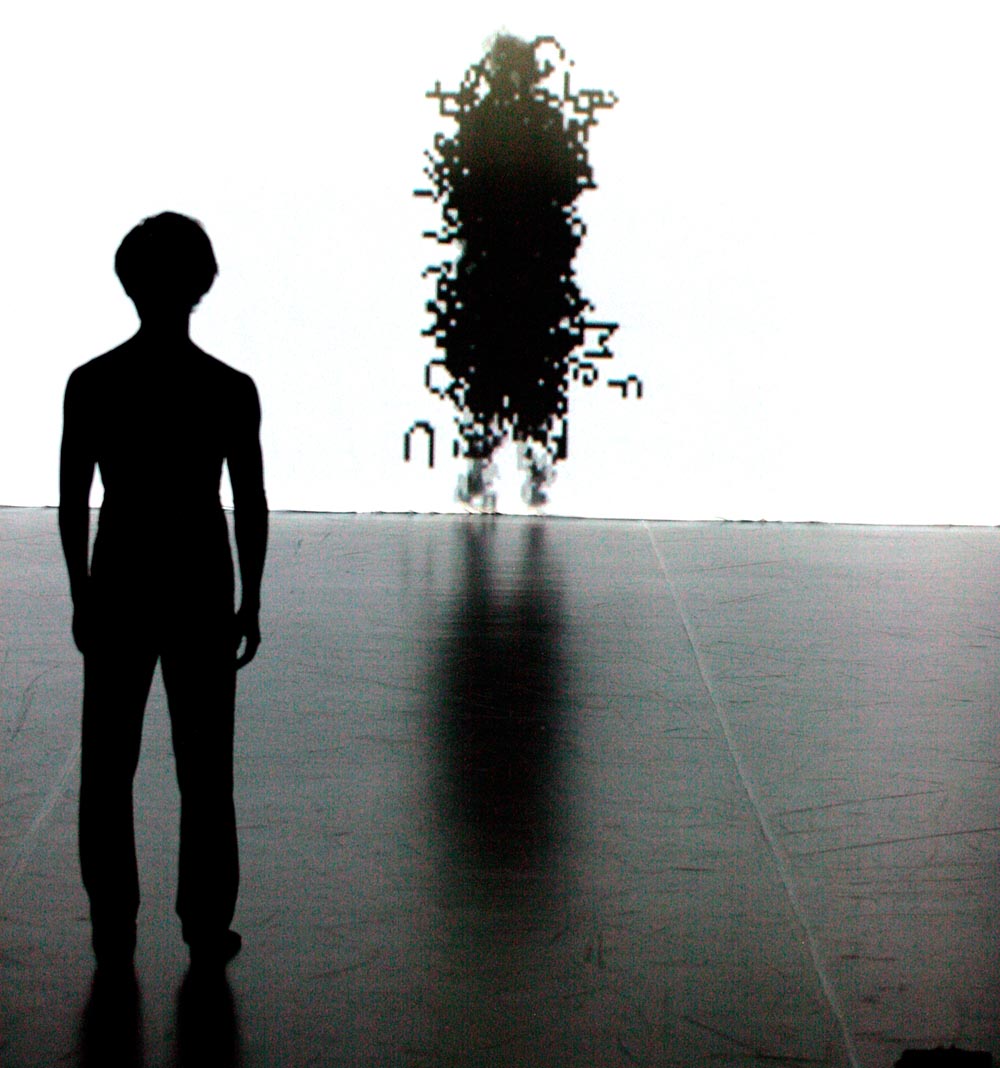 New Vision ran from 13 to 15 Sep at the National Museum of Singapore Gallery Theatre.

Read our interview with the choreographers:www.artsrepublic.sg/interview-with-t-h-e-dance-company