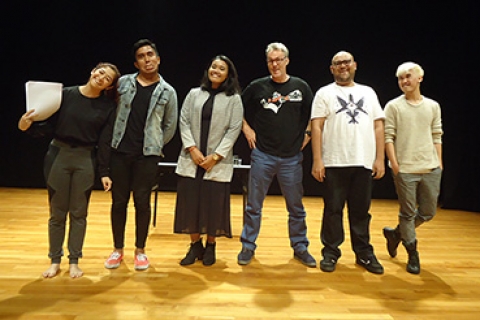 Is this theatre?
The play is essentially a cold reading for the performer, like reciting a passage for Oral Examination. Mostly, the actor (Tonight, it is Munah Bagharib), acts as a facilitator – she carries out the directives of the Iranian playwright, Nassim Soleimanpour. One can go to the length to say she is ‘manipulated’. So, both the performer and the audience, including me, are in this for the first time. Both parties anticipate, and participate, as the story unfolds. It gets a little morbid nearing the end. The thought – of someone authorising somebody, to dictate someone else’s actions, without being present – is scary.

Our first task is to number ourselves. (Now we are stripped of names.) A strategic move for the convenience of involuntary participation for what is to come in the play? But also, I thought, what a brilliant way to acknowledge the actor (or actress, in this case). How often does a performer get to scrutinise her audience, express acknowledgement for their presence, and be acknowledged in return? It is an awkward, but necessary exchange of uncomfortable, fleeting glances between the audience and the performer as we report our number. The strength of the audience stands at 169, the crowd cheers, and everyone’s existence is sanctioned in this theatre. 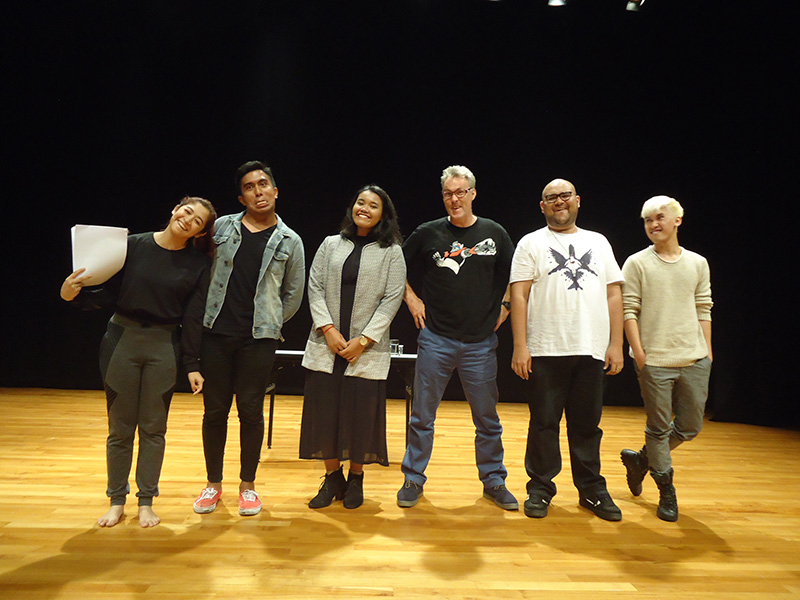 White Rabbit
We encounter our first rabbit – a theatre-going rabbit, who had to cover up, so that her long, erected ears do not block the view of other animals watching the show. That is being considerate, right? To no fault of the rabbit’s, due to her inherent physical difference, she willingly sacrifices a small degree of freedom for the comfort of the others – the majority.

Putting it in societal context, I think about the many accounts of inconvenience minority communities face in everyday life. It can be due to differences in outlooks or beliefs. Perhaps this witty rabbit parable is really about conformity – the degree of freedom a minority gives up or a majority can enjoy. This issue becomes particularly sticky in the context of our multicultural society.

We must thank Munah’s light-hearted 1-minute role play of the above parable for dispelling some grimness at this point.

Red Rabbit
A few days before the show, I read a similar allegory on Facebook. Instead of rabbits, it was a social experiment on 5 monkeys. It laments the impact of negative reinforcement, causing the animals to become conditioned by external factors and stripped themselves of a certain freedom of choice. I dismissed it as yet another ‘viral’ article shared by the masses as a knee-jerk reaction on social media.

To my surprise, this allegory appeared again in this play. So I dug out the Facebook article, did a little research, and found the earliest mention of this social experiment in a business management book, titled Competing for the Future by Gary Hamel and C.K. Prahalad (1996).

Unlike these guys who are telling us to challenge the way we do things now in order to change the future, our playwright seems to paint a dystopian vicious cycle where the past determines the future, such that ‘the future is the past’. In his opinion, it seems like no one can escape this circle of life, perhaps revealing his fatigue for life, or reflecting his own predicament of being imprisoned in his country.

Can I review this play?
How should I review a play where the performer is merely carrying out instructions? Can I review a performer’s act that is remotely controlled by someone far away from here, barred from leaving his country, denied of a passport? (At least, at the time when Soleimanpour was writing the play.)

The ultimate objective of this play demands the performer to make a decision between two glasses of water, of which one is purportedly poisoned. On hindsight, I wonder does the performer really have a ‘choice’? Soleimanpour punctuates the paragraph with a melancholic sentence: ‘Life is the longest solution to death’.

At one point, the playwright apologises for apparently creating a ‘killing machine’. However, like ‘nobody puts the inventor of the gun on trial’, the onus is on the performer, and/or the audience to allow or forbid the inconceivable from happening. The actor can choose to stop at any point. The audience is encouraged to intervene. But nobody chose to exercise this freedom of choice. Why?

Honestly, I am slightly disappointed that no one rebelled against the script; no one tossed the script away and proceed to give a whole different act. But I suppose that demands a great deal of courage, and anyway, all of us are curious about the rest of Soleimanpour’s story.

This play seems perfect for anyone who may want to try theatre for the first time. Because nobody knows where the story is going, the reactions we get, from both the actor and the audience, are authentic, first-hand expressions. The essence lies in the actor’s ignorance about the script prior to performance to give an earnest act. And Munah lends a comedic edge to her earnest facilitation and impressions of the stories in the play. We enjoyed it.