[Review] Off Kilter quietly lends a voice to the marginalised 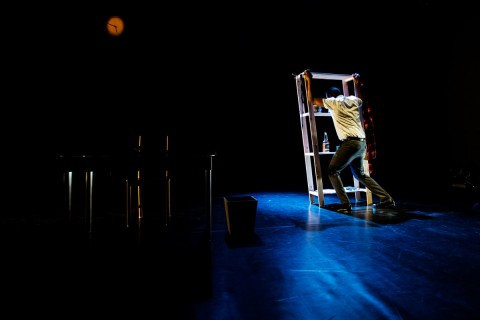 He was having an off kilter moment in Off Kilter. 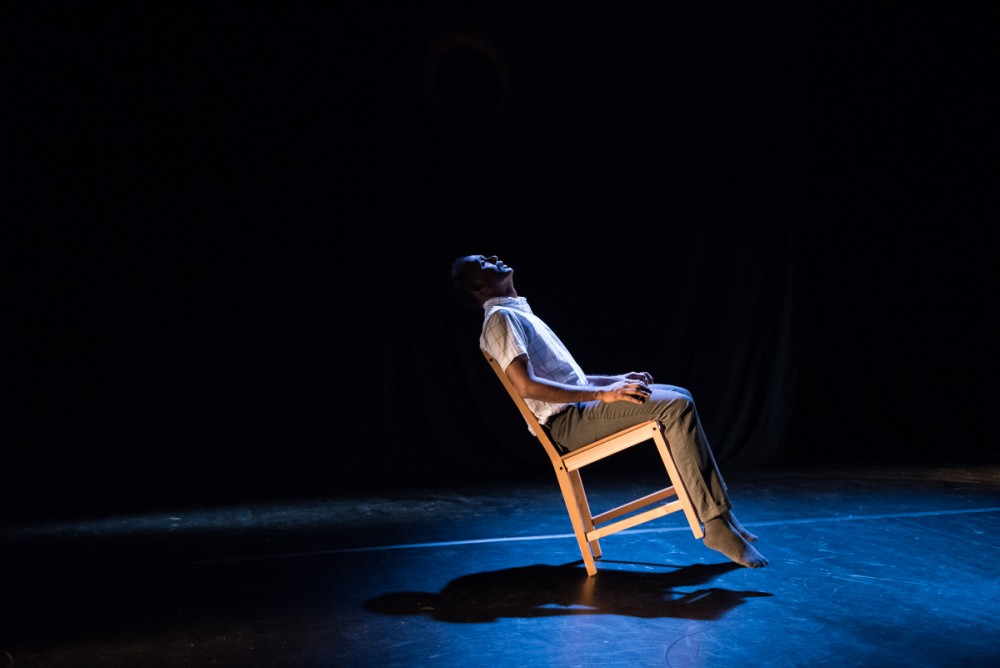 But the beauty of the script is such that as audience, we can't really tell if something's gone wrong on stage. Every mistake can be read as the protagonist having a bad hair day. In fact, at first, I didn't think there is a need for illusions to bring out the protagonist's turmoil in the series of unfortunate events. Meyyappan, acting as the protagonist, is a pronounced practitioner of physical theatre; I believe his use of the physical body and other theatre devices could well have brought out the same result without employing magic tricks.

The revelation comes later during the post-show dialogue. One audience member, who is troubled by mental illness, points out that the surreal moments in the play faced by the protagonist, made possible only by sleight-of-hand tricks, is poignant and accurately reflects the mental state of a mentally-ill person at times of mayhem. 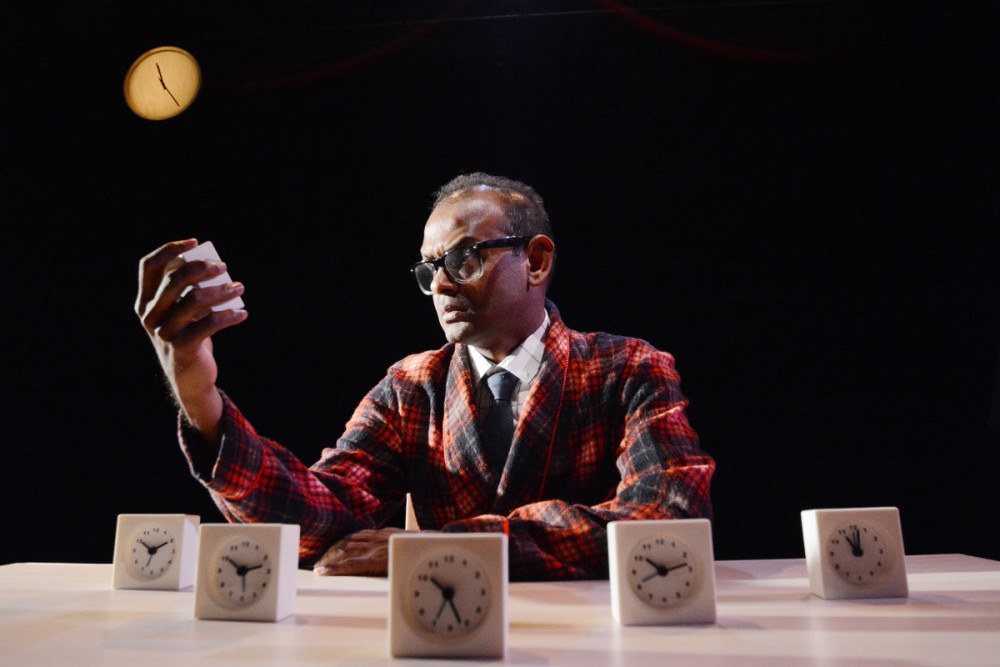 In our interview with Meyyappan, he notes the frustration about the way deaf art is being pigeonholed. I would hate to label his work at this point, but I must commend him for the fresh perspectives that he brings to the stage. As a deaf theatre maker, Meyyappan dispenses elements of sign language to supplement the storytelling, perhaps to cater to the deaf audience. Imagine having to watch the entire play without emotionally-manipulative soundtracks and sound effects, missing out on the irritating ringings of the alarm clocks and dark suspense music, the show might not have seem as funny or tensed. With the enhanced visual aspects, like the exaggerated vibration of the alarm clocks passing through his hands and body, the deaf audience will be able to access the comic relief, while the mainstream audience can have a different take on the visual cues.

It is clear that Meyyappan wants to highlight the difficulties and challenges a mentally troubled person goes through during stages of depression when their routine life gets disrupted. A book shelf that houses almost everything the protagonist owns becomes off-centre, and in tonight's version, things come crashing down onto the floor, water spills, signalling how a dismissal letter could turn someone's world upside down, and his whole universe crumbles into a chaotic mess that the protagonist becomes unable to handle. 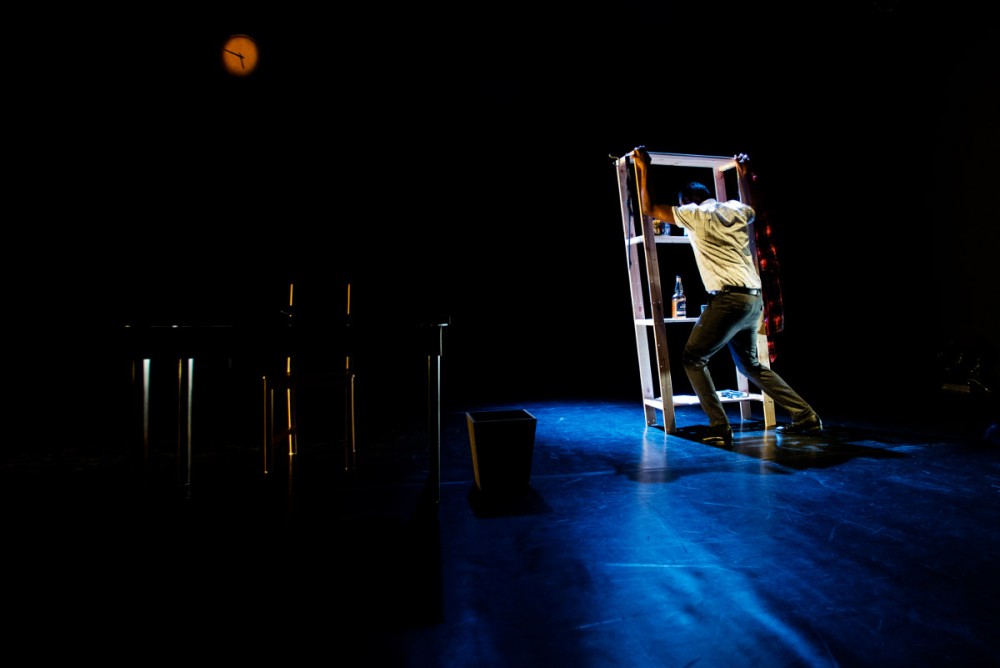 Meyyappan then aptly illustrates the stage of denial someone with mental disorder may experience. In the play, the protagonist overturns his rubbish bin, and finds his torn-up dismissal letter magically disappeared, and the company ID card has magically returned to his blazer's pocket: That perhaps the unfortunate events that happened the day before is just a bad dream.

In another moment, the protagonist tries to get out of his depression by beginning to pen a letter (of employment or complaint?) but is somehow hindered by pencils that disappear and multiply at will, or sharpeners that do not cooperate. To someone who has no mental illnesses, these may all seem like feeble excuses to move on in life. But this play, with its use of visual tricks, manages to convince you that it is not simply so with a mentally ill person; these surreal and illusionary moments are very real, and it is not within the person's power to overcome these obstacles.

But the most unforgettable moment for me in the play is when the protagonist walks his two fingers on the wooden table, which suddenly looks like an expansive desert. Bringing the audience's attention from the life-size protagonist on stage to the walking fingers on the table, Meyyappan hints at us to peek into the mental state of the protagonist. The fingers walk with such nuanced steps that are so believable that we are able to imagine reaching into the mental dimension of the protagonist, and follow its footsteps of traversing the vast empty land (table), depicting loneliness; tipping over the edge of the table despondently, but pulls back in the last moment. (Finger-walking looks like such a simple feat, but I just realised I can't walk my fingers because one is longer than the other! How does Meyyappan achieve it?)

The two fingers walks up its own body, and gives itself a hug. At the end of the day, Meyyappan signals that besides the support that others can offer, more importantly, you must help yourself.

Although Off Kilter employs a very different approach from the complex and rich visual offering of Meyyappan's last production, Butterfly, it is a necessary play that exposes the mental state of mind from a marginalised perspective.