[Review] Asylum — These Ties That Bind 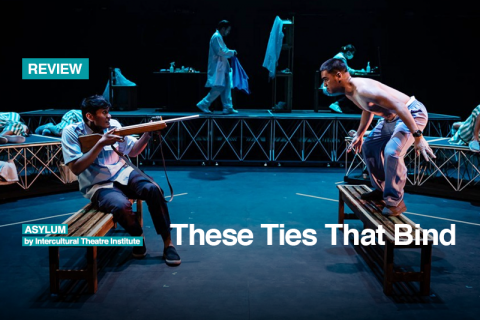 “These lines we draw, these walls we build”.

When staring into a cage, those looking in constantly focus on what is being kept in.

But have we ever thought about what was being kept out? 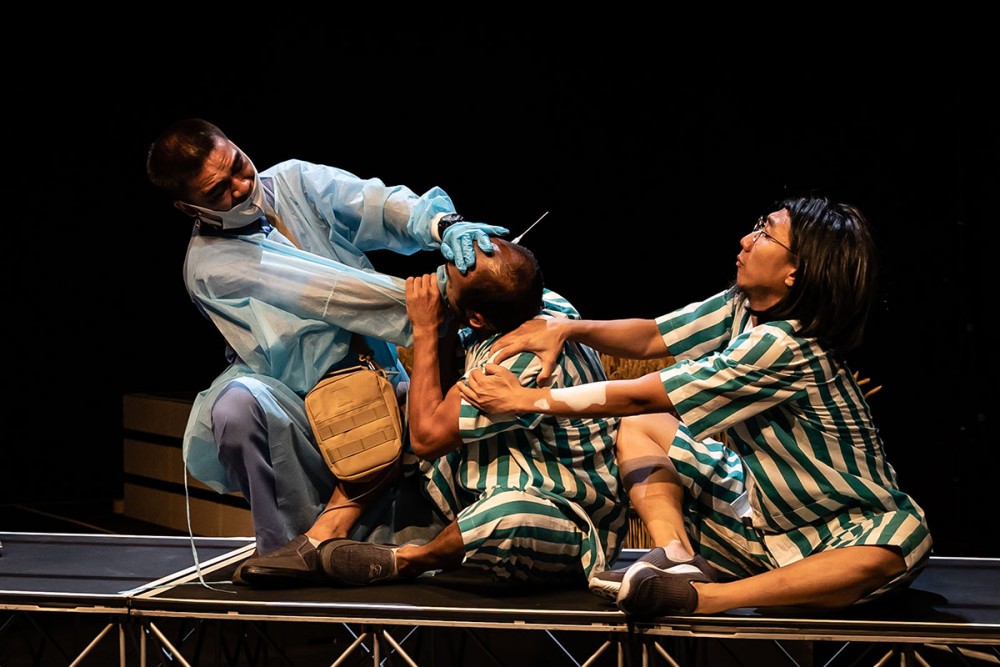 Asylum very nearly presented itself as yet another dystopian, apocalyptic Netflix-ish story that involves the ubiquitous threat of zombies and a rampant disease that spreads across the population, killing everyone in sight. Indeed, a literal zombie-like figure (although never referred to as a “zombie” in any language) appears towards the end of the show, complete with guttaral sounds that would very clearly signal to you that your death was imminent, if you were within earshot of the sound. Indeed, the presentation of disease as real and tangible manifests itself constantly through sound, whether be it the “zombies” growls or the patients’ explicit dscriptions of their malady in various languages.

But what keeps the audience captivated seems to be some very well-intentioned theatrical devices that were both simple yet effective. Perhaps it was to be expected, having a stellar tag-team of both Jean Tay as playwright and Oliver Chong as Director/Set Designer of the show. Nevertheless, this devised piece is indeed much more than it seems to the naked eye. 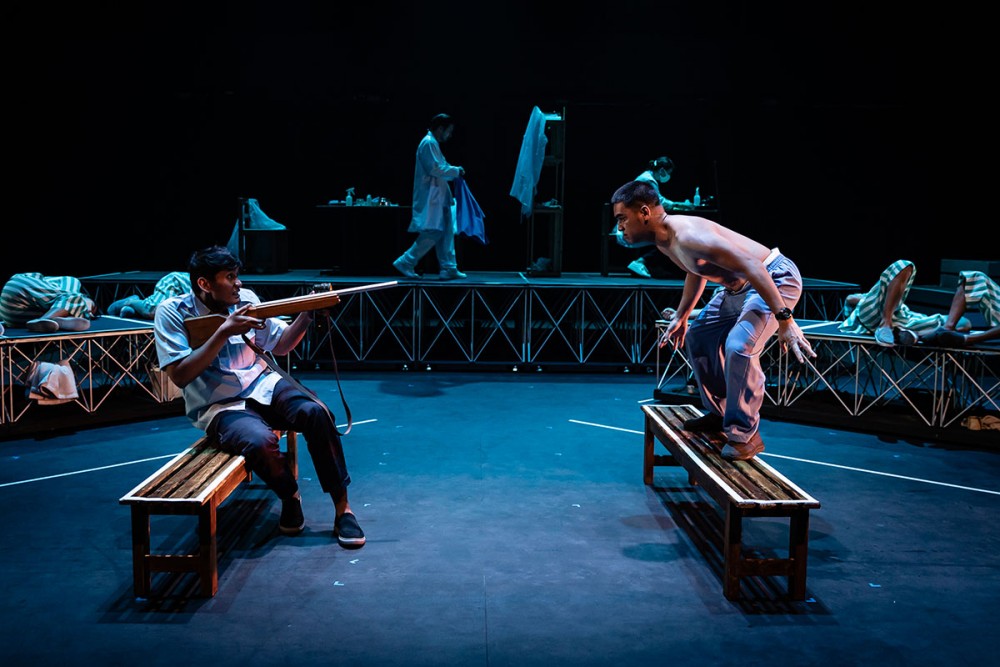 The first truly strange device that stood out was how the actors enter, taping down and literally demarcating the stage as they deliver their lines in the opening scene of the show. Each character speaks of how, both as individuals and as a group, they have been discriminated, shunned, and deliberately ostracised by society. They lament, in both native tongue and English, a deliberate touch by the actors which truly spoke to the part of me that appreciated diversity in language, especially within theatre and performance.

This literal setting-of-the-stage using tape is paralled at the end of Asylum where actors end the show by removing the tape from the boundaries of the stage they perform in.

Although this device of mirroring similar actions to both start and end the play have not done well in some other shows, Asylum managed to pull it off as an act that was deeply significant to the storyline. Perhaps making the literal boundaries obvious to the audience drives home the presence of The Other and highlights The Other in society. Perhaps it reminds us that boundaries are there for a reason. Or maybe, it tells us that “everything within this tape is the stage, and this is but a story”, and that to view it as a story is to maintain the suspension of disbelief necessary to theatre; that this story is fiction, not fact. Yet the outbreak of a deadly disease, the event central to Asylum's storyline, parallels the deadly pandemic which just blew (and is still rampaging) through our world. The greatest stories blend fact and fiction into a cake mix so tightly knit that it often becomes hard to tell them apart, which was the case in Asylum.

Asylum's set, sound and lighting design did little to spark great interest in the average audience member. But as mentioned, what little it did conveyed the set-up and surroundings of a clinical isolation facility well. In particular, the heavy use of primary colours by lighting designer Faith Liu Yong Huay set the emotional stage for Asylum's story to happen, and helped the audience feel as if we were in the facility with its patients. The well-placed use of reddish-orangey colours for scenes where danger, daybreak and the escape occur often either signalled the end or the start of something new, something that would very soon change the fates of all eight patients. 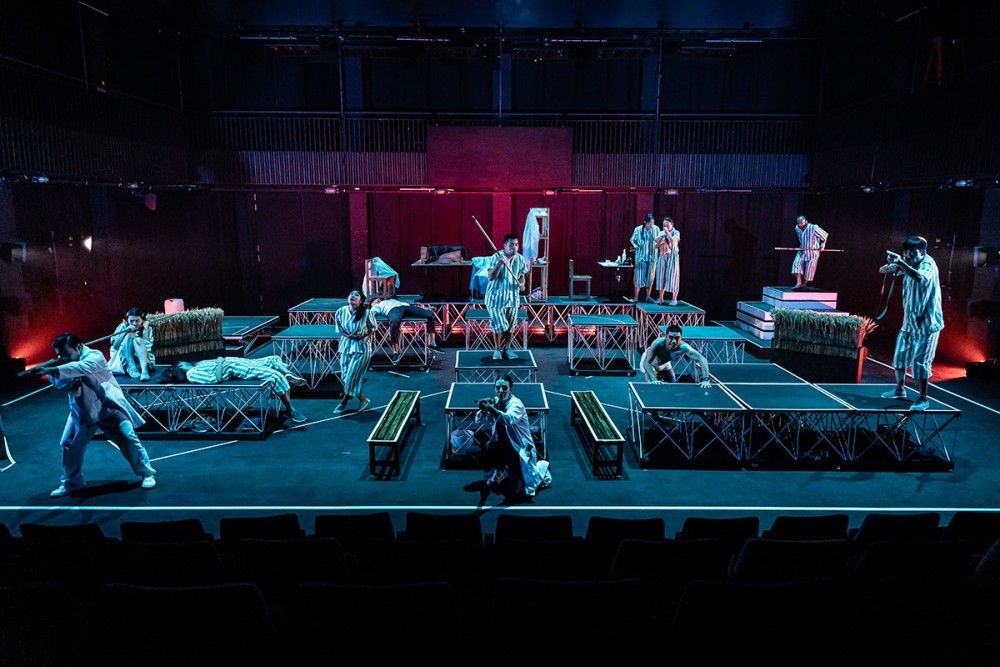 The slight dampener would probably only be the narration of each individual character’s fate after the escape attempt by the facility’s patients. After the furore of Dia getting shot, each character tells us what transpired in the aftermath of the shooting, and their various departures from the facility. But in the spirit of the fear, the unknown and the highly tense and anxious mood generated by the whole theatrical experience, it would perhaps have lent a greater sense of foreboding and questioned the narrative of quarantine and those who are quarantined more if the fates of all involved had been left open-ended. Still, as each character never really truly escapes to a fate more pleasant than the one they left behind, audiences are still left to ponder if indeed, there is ever truly an “escape” from the memory of being incarcerated, in any way, shape or form.

Overwhelmingly, the sense of fear and of the unknown lurks rather conspicuously throughout the entire play. Whether the injections the medical staff give the patients are truly helping, no one knows; whether the “tiger” prowling around outside the facility truly exists, no one knows; whether the story accurately reflects history, or was conjured up during the devising process, we can never know. Perhaps being sent to wherever they were had its bright side too. Perhaps the walls, the gate, and the guard in the form of Ahmad kept the patients from being subjected to daily abuse, insult and the condescension of their families. Regardless, Asylum does more than simply reflect the pandemic of the present. It draws links to history, to human history, to the history of how disease, when it rears its ugly head, is never the true enemy, but how its greatest skill is always in turning the human race against itself in its fight against what is purportedly the Enemy: disease.

This review is also published on the author's Medium page.