As vastly connected and algorithmically driven virtual spaces swiftly become spaces of mass culture, the phenomenon of our contemporary life can be at times experienced as a viscous and shifting landscape populated by images of the spectacular in a hyperreal environment. The algorithm of late capitalism affects our contemporary lives via tailored social media feeds, advertisements and search engine results. Nike sneakers, Gucci handbags, Peloton bikes and Instagram likes are superficial, image-based objects of fetishistic desire that manifest within this algorithmic reality; a space where we too are reduced to capital. In Algorithmic Fissures, artists Jamie Cooper (UK) and Jaxton Su (SG) create a speculative space in response to the influence of the algorithm on contemporary life and mass culture. Within this space, fissures, glitches, breaches, hacks and flaws in the algorithm have developed over time, presenting opportunities for new algorithmic forms to take root.

Is the algorithm a symbol of the height of a late capitalist civilisation? Or a future relic of a failing one? How do we position one's intrinsic entity against the environment in an alienated society dominated by capitalism? How do we discern between images and the real and navigate within this increasingly illusory world? Presenting new works by Jaxton and Jamie that represent an exploration of possible algorithmic compositions, the exhibition reflects upon and questions our contemporary phenomena of digital surplus, capitalism and hyperreality. 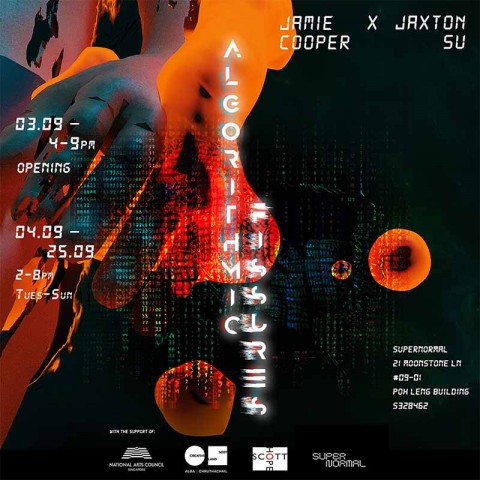