Selected Verses from in within over under beneath Therapy

What happens when mental health issues spill out of the therapy chair?

Selected Verses from in within over under beneath Therapy delves into spaces beyond the therapy room, experimenting with how mental health issues can be represented on stage. It gathers 2 collections of 4 short performances each, conceptualised and written by local emerging artists. These pieces are as much about depictions of issues as they are about our process of finding ways to talk about them. We invite the audience to join us in shining light into overlooked corners of public discourse, creating new spaces for encountering experiences and conversations around mental health.

SET A
The Black Sheeps' Tales picks up pieces swept under the rug, for those who are cast out by family to find their way and reclaim their place in the conversation.

1. Clocked on the Train follows 3 individuals lost in their own worlds on the MRT, until this ordinary day blurs, their stories bleed through their book covers, and the train begins to break down.

2. Here Where You Were charts the tender relationship between Nenek and her grandson, a world apart but having shared similar struggles — when you feel like your time is up, what do you tell someone whose time is just beginning?

3. In The AI "Therapist", scientist/programmer Sam attempts to create a mental health companion bot. However, when all the clichés and stereotypes fail, Sam begins to experiment with unlikely qualities to put into the bot

4. Be Water 若水 trickles through the journey of the protagonist, who discovers that water is more than survival and healing – it triggers her traumas. But water is everywhere, it's within and without.

SET B
The Gentle Lions' Tales transmutes the might of the strongest creatures through love, shaping our stories through the unlikeliest alliances and inexplicable bonds between beings.

1. the tears we can't seem to find seeks for gentler spaces in a world that demands we conceal our vulnerabilities, through an unlikely conversation between two women: one who has nowhere to cry, and another who can't seem to cry.

2. The other night, I swallowed the moon is a play about love. Reimagining the myth of Chang'E, the play invites the audience to sit with difficult feelings, delving into the violence that is enacted on the female body, body dysmorphia, and self harm.

3. GAI 雞 tells the story of two sex workers trying desperately to navigate the modern sex work industry in spite of their murky legal status and a society that refuses acknowledge their existence.

4. Interview with a Water Bear 与一只水熊虫的专访 is based on the personal accounts of a man diagnosed with bipolar disorder, and explores what it means to drift upon the waves of emotion that come and go.

About Matter.Less 所谓工作室
Matter.Less is a bilingual interdisciplinary arts collective of young artists, founded in 2018 with the aim of literary experimentation and adaptation. Their work has since expanded to broadly theatrical and multimedia productions with a focus on text-based elements, including 5 editions of "re: Verse" experimental performances that featured spoken word, short film, puppetry and movement. They provide platforms for creative writing and interpretation through social media and in-person events, bringing a new generation of artists and audiences together. 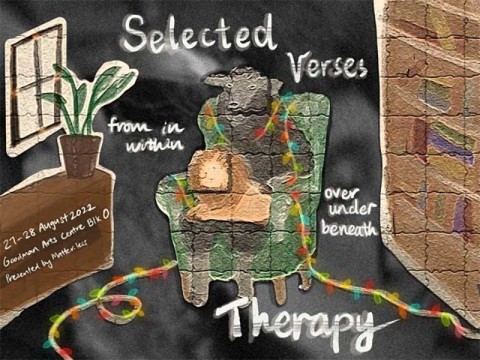