Organised by: Esplanade – Theatres on the Bay
Performed by: In collaboration with Ravindran Drama Group (RDG)

RDG's annual Tamil 10-minute play festival Pathey Nimidam was founded in 2013 by festival director and theatre practitioner, Hemang Yadav. It involves the participation of numerous Tamil and non-Tamil theatre practitioners—directors, playwrights and actors—in the creation of diverse works wrought from mutual respect and cultural exchange. This eighth edition's 9 narratives deal with the idea of the underprivileged and highlight issues close to our hearts.

It takes days, months, even years to grow what we eat. But it just takes seconds to push them aside as unwanted food, as waste.

She has been watching you. She knows you—the hungry ones, the dirty ones and the wasteful ones. She is now here, to clean after you, with complaints, smiles and tears.

A determined couple, one Malay and the other Chinese-Indian, is desperately trying to register their newborn baby as Chinese on her birth certificate in the hopes that it will give her a better life growing up in Singapore. However, they are faced with backlash from an officer who perceives their actions as self-loathing and is insistent that the couple accepts their fate.

All they want is to give their child a brighter future, to ensure that the hardships of life she is bound to face will not be due to her race. A short yet powerful look into autonomy, privilege and power, this play asks the question: What does it mean to be a minority in the Lion City?

The real fight for feminism starts from within—Indra is just your everyday Indian woman, placed on the hot seat in a reality TV show. The audience has the power to decide the outcome, even as she fights to justify her choices, asking herself, "Am I a bad feminist?"

Latika has decided to permanently relocate to the USA with her son Nandu, a decision easy to make but potentially difficult to fulfill. As they make their way to Changi airport, their taxi driver, Cheng, takes them on a journey down memory lane. By the time they reach the airport, Latika is in a dilemma. Should she stay or should she go? Will Nandu allow her to follow her heart?

Did Madhan make a mistake admitting himself in the hospital?

Is depression even an illness?

Journey with Madhan as he meets a mysterious visitor amidst his battle against the blues.

A middle-aged woman in Singapore finds herself caught in a helpless situation, forced to separate from her aged mother fatally infected by the Covid-19 virus in Chennai. She endures a traumatic recollection of this experience at her counsellor's office, trying to make sense of her loss, moral dilemmas and her ultimate choices. Set in the context of the global pandemic, Oxygen 95 reveals the human preoccupation with duty, filial piety, power and self-preservation, all with cruel honesty.

An ailing mother and her two sons, one living with her in Johor and the other separated across the Causeway, grapple with memories, technology, racial identity as well as gender roles.

The two sons reminisce about their past and ponder about their future, which seems bleak as the Covid-19 virus sweeps across the world. Will they ever have a break to enjoy a plate of goreng pisang?

With the moral support of her good friend, a foreman from China, a domestic worker from India decides to join a Singapore cooking contest. However, she is faced with many uncertainties. What does she even know about local culture and their dishes? Should she even take part, why would she even try?

In an uncertain world, when so many decisions we make are a gamble, there is no telling what we can learn—and from whom.

A young artist and an old one converse without conversing.

Maya Dance Theatre presents Death of an Artist, an excerpt from Pancha installment 4 (premiering October 2021), which explores a sense of belonging and value in relation to seniors in our society. A young artist and an old one converse without conversing. The parallel worlds of both artists—their lived experiences, what their eyes see, what their ears do not hear—frame this uncertain space where Death herself is ever-present as a many-layered entity.

Based on Tamil poetry penned by the late Mr. N. Palanivelu, this interdisciplinary dance-theatre piece is co-authored and performed by Hemang Yadav and Shahrin Johry, and co-directed by Kavitha Krishnan, artistic director of Maya Dance Theatre, and Sharda Harrison of Pink Gajah, with music composition by Lalit Kumar. 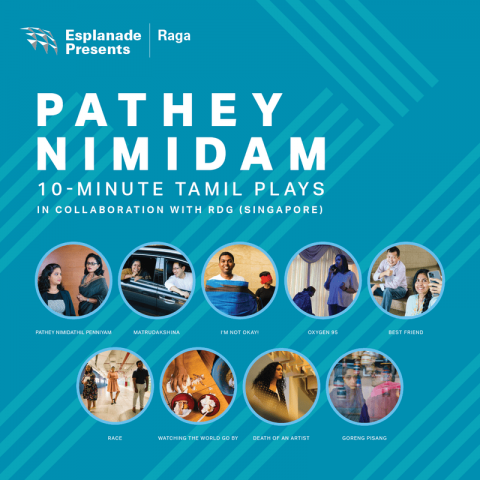