Organised by: Esplanade - Theatres on the Bay
Performed by: Hunter Mah and Jill Chen

Lunch just got better. Nourish your soul with lunch-time chamber music concerts in Esplanade Concert Hall performed by some of Singapore's well-loved classical musicians. Then, fuel up with actual delectable morsels at participating F&B joints at Esplanade Mall, as you let the positive post-concert vibes take you through the rest of your day.

"Does tradition survive in the face of profound change?"  This is a question relevant to us in our time as it was to European artists in the 1920's.

Having suffered the shock of an unprecedented industrialised World War, and faced with an uncertain future, European composers sought new ways to express their new realities.

If the tension between change and tradition is universal, then it is unsurprising that this classical-modern hybrid style would endure the volatile decades and remain appreciable to listeners centuries later.

Receive a $10 Esplanade Mall voucher with every ticket purchased. The voucher will be emailed to ticket holders on the day of the concert. T&C apply. 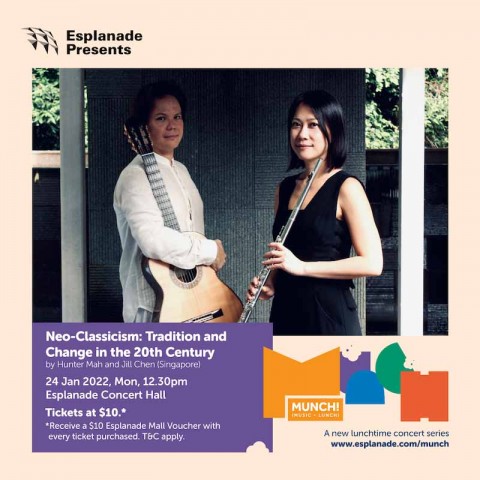