Organised by: So Drama! Entertainment

Back for the sixth season, ciNE65 2021, the largest national platform for film students and budding filmmakers to share short films on our Singapore story, presents its second edition of the ciNE65 Film Festival 2021. Celebrating short films produced by local filmmakers that deepen our sense of belonging to Singapore, the ciNE65 Film Festival 2021 will be held from 23 to 25 July at two different venues.

Open to the public, the festival will showcase the diversity of our local film industry by screening award-winning local short films, as well as spotlighting films from rising Singapore filmmakers including Huang Junxiang and Chong Yu Lun, through the SG Filmmaker's showcase. One of the co-directors of this year's NDP music video, The Road Ahead, Junxiang's showcase will feature his short films such as Give Yourself a Chance, the film that bagged the audience award at the 2012 Very Short International Film Festival.

The festival will also include shortlisted films of ciNE65 2021's short film competition, ciNE65 Movie Makers Awards, and commissioned films from current and past ciNE65 seasons. A series of animated short films including The Violin, curated by local film director Ervin Han, highlighting a different facet of local films, will also be shown during the festival.

ciNE65 Movie Makers Awards is currently calling for public voting for the Audience Choice Films awards which includes Favourite Film, Favourite Actor and Favourite Actress. The voting period started on 14 May till 21 July, 2359. The public may cast their votes here: https://bit.ly/cine65MMA2021. Winners will be announced on 28 July 2021. 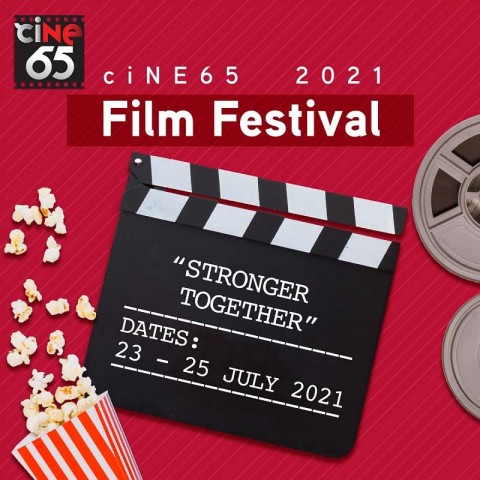