Live Conversation with Paul Rousso on A Pop Tribute to Paper

Organised by: Ode to Art

This coming Thursday 29th April 9pm (SGT), enjoy an exclusive conversation with internationally acclaimed American artist, Paul Rousso, as he takes viewers behind-the-scenes through his studio, introducing some of his new works that have never been shown before!

Through this session, better understand Rousso's fascination with paper – currency, advertising, newspapers, magazine – its history and use, its rise and fall. Despite the complexity of his artistic output, you'll find that the character and subject matter of Rousso's art is relatable to everyone, so much so that it practically jumps off the wall!

Raised in North Carolina and educated at the California College of the Arts, Paul Rousso shows his works at galleries and art fairs around the globe. With influences ranging from Dr. Seuss to Roy Lichtenstein, Rousso casts his pop art sensibilities on a 21st-century scale.

His signature concept, "Flat Depth", which he has been refining his entire professional career, to him is the logical progression of modern art - to render a flat object three-dimensional, or to collapse a three-dimensional object into two dimensions - and is a fusion of countless complex artistic methods, including painting, printing, sculpting, welding, chemistry, digital manipulation and digital printing. Through heat infusion on plexiglass, Rousso creates his captivating hyper-realistic, hyper-sized, pop-art inspired sculptures. 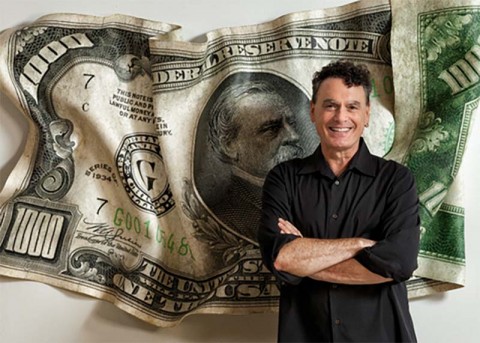