Hailed as the only female avatar of Lord Vishnu, Mohini is depicted as a femme fatale who uses mysticism and charm to distract and suppress her opponents. At the same time, we also see how she enters into a union with Lord Shiva - transcending gender norms - to produce Harihara.

Hindu mythology uses gender as a vehicle to communicate metaphysical concepts of material and spiritual reality. This production presents instances of Mohini's appearances in mythology to understand why Vishnu (the embodiment of spiritual reality) comes 'wrapped' in material reality.

Who is Mohini and what does she represent?

About the Artiste:
Seema Hari Kumar is a senior disciple of Smt Neila Sathyalingam and has evolved from a student to a performer-teacher over the last 25 years. Apart from taking to the global stages through various dance stints in Asia-Pacific, Europe and Africa, Seema has also played key roles in Apsaras Arts' productions like Chidambara Ragasyam, Heroines of Raja Ravi Varma, Nirmanika, Aalam and Aarupadai to name a few. In 2011, Seema collaborated with dancing duo Sheejith & Parvathy from India to stage a full-length thematic production 'Dvayam' at the Esplanade Theatre Studio.

A versatile artiste, Seema has also been featured as narrator in live dance-theatre productions like Agathi, Sivagami and Sangamam. She has also assisted in the mentorship and choreography of schools' dance segments during the Singapore Youth Festivals and on Vasantham's "Salangai Oli" programme. Given her natural flair with kids, Seema has been teaching since 2003 and was instrumental in launching the Bala Bharatham curriculum at Apsaras Arts. She is the first recipient of the Neila Sathyalingam Memorial Award (2019) and the Bharathaa Arts Achievement Award (2018).

An Initiative of Dance India Asia Pacific
Mohini: The Divine Enchantress is a dance-theatre developed at the Residency Programme launched during Dance India Asia Pacific 2018. Under the artistic mentorship of Smt Priyadarsini Govind and Smt Anjana Anand, Seema has undergone a rigorous training process in conceptualisation, choreography and script development since Sep 2018.

A narrative woven through Indian puppetry, the dance theatre will bring a unique flavour to the audience! 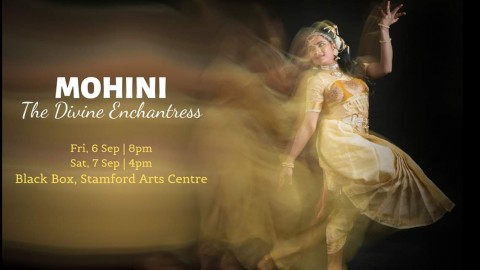