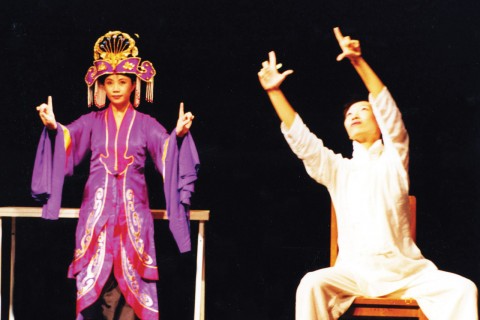 Previously, we discussed with Danny Yung about his latest One Table Two Chairs project - the Hong Kong Belt-Road project - and his experiments with the unique four mirror walls setting. Now, we continue the discussion on the evolution of One Table Two Chairs, and its role in facilitating cultural exchange.

(Yung responded in Cantonese with a recording device in Hong Kong. The sound clip was then sent to Singapore, and the answers were transcribed and translated by Arts Republic.) 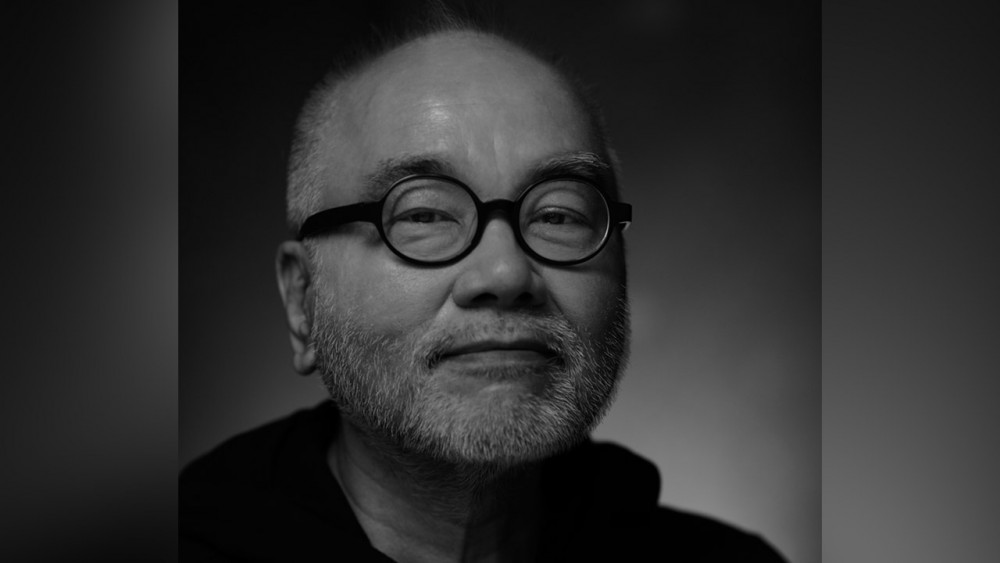 2. The One Table Two Chairs project has been ongoing for many years. What are the 'guiding forces' behind the curation process of every edition? Is it current affairs? Regional or global trends? Or the artistic path of Zuni Icosahedron?

I guess, usually, I do not curate works based on themes. Rather, I curate them more materialistically. For example, one table and two chairs actually make up a set of installation. How we should enact this installation is open to interpretation. I rarely say, let's borrow this setting to discuss terrorism, or religious clashes, or any other global issues. Well, I don't mean that that is not possible. At the end of the day, what I’m providing is a space. And in this space, there are no guidelines to determine the content. Anything goes in this space. This is consistent with the way Zuni Icosahedron works. Our creative process has always been open-ended. This means that most of the time, we discuss theatre from a materialistic point of view: the constraints of theatre, its boundaries, the technology used that influences theatre, the stage and its relationship with the audience. Here, we provide a space for artists to develop and to elaborate on the issues they are concerned with at the moment.

I suppose by now, everyone should know that One Table Two Chairs is a setting in traditional Chinese performing arts. It has a history of a few centuries, reflecting the essence of traditional performing arts in a minimalistic manner. One table and two chairs leave a lot of room for imagination, for enactment. At the same time, they can also represent a spatial relationship with the space they are in. 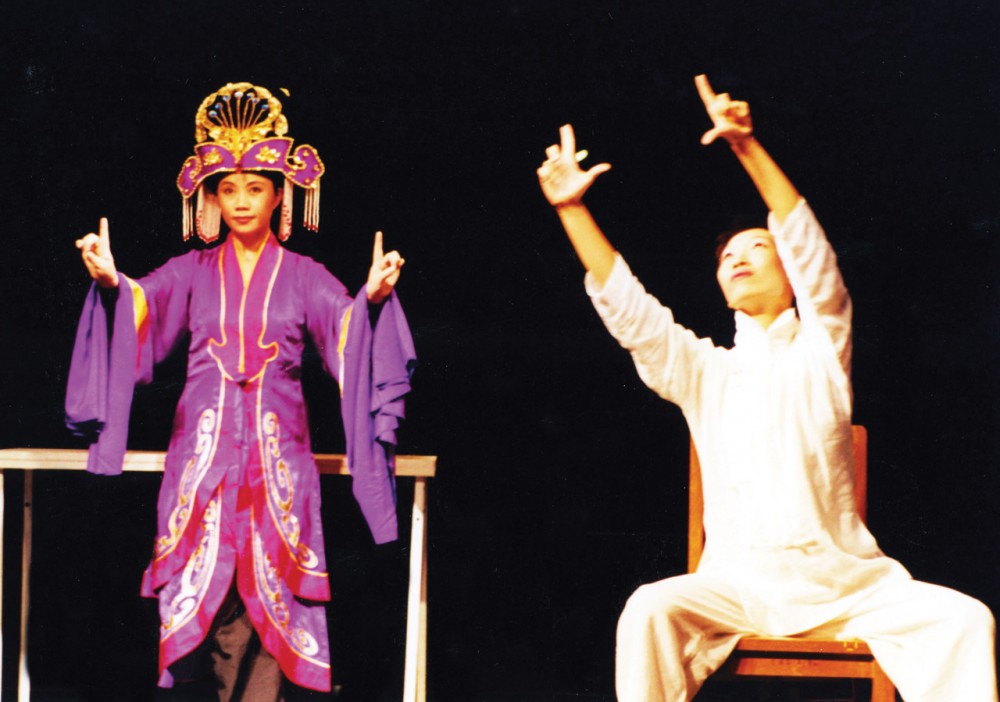 The project for One Table Two Chairs has been ongoing for several years, since the 1990s. At first, One Table Two Chairs has much room for interpretation. Gradually, it became a framework for cultural exchange. Just before and after 1997, I started using this concept of "one table two chairs" to invite other artists to collaborate. The guidelines that I give them are that the work should be 20 minutes, consists of two actors, and one table two chairs. Then see what they make of it. There are no other constraints. I did not specify whether or not the artists should discuss about Hong Kong’s return to China in 1997, or any other trending topics at that time. They could talk about anything they like, but the basic framework must be one table, two chairs, 20 minutes and two actors. 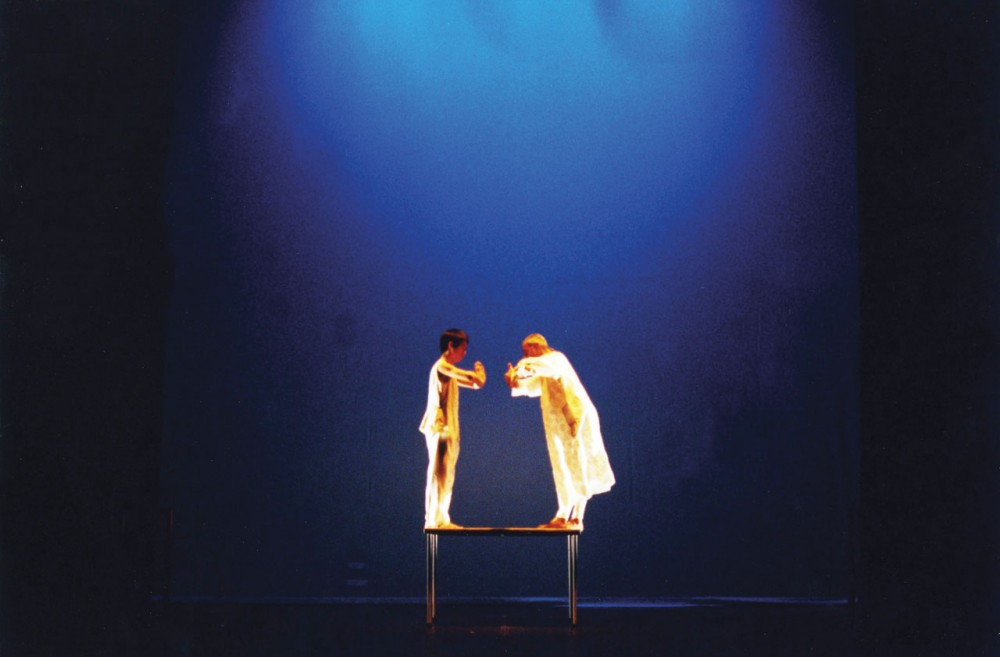 In 2000, there was a total of 24 works being commissioned. Amongst these, twelve were selected to be performed in Berlin, and then in Hong Kong. In commissioning 24 artists and eventually selecting 12, the most important thing is in using this as a platform to do a comparative research. We compare and contrast the different methods each artist use, their creative process, how they work within the constraints of one table two chairs and two actors. By observing these, we can analyse the relationship between their cultural background and their creative process. More importantly, in the year 2000, we could observe the discussion and interaction between the 12 artists, because eventually, they are the leaders steering the project. This was the most important aspect of the project in 2000, the communication and interaction between the artists. Well, I feel that the usual arts festival seems to be overly commercialized, simply for the public’s entertainment. There are very few arts festivals that focus on the artists themselves, or are made for the artists. In the One Table Two Chairs project, the most important target audience is the artists. These artists can see how each other handle and manage the constraints of One Table Two Chairs, and learn from each other. 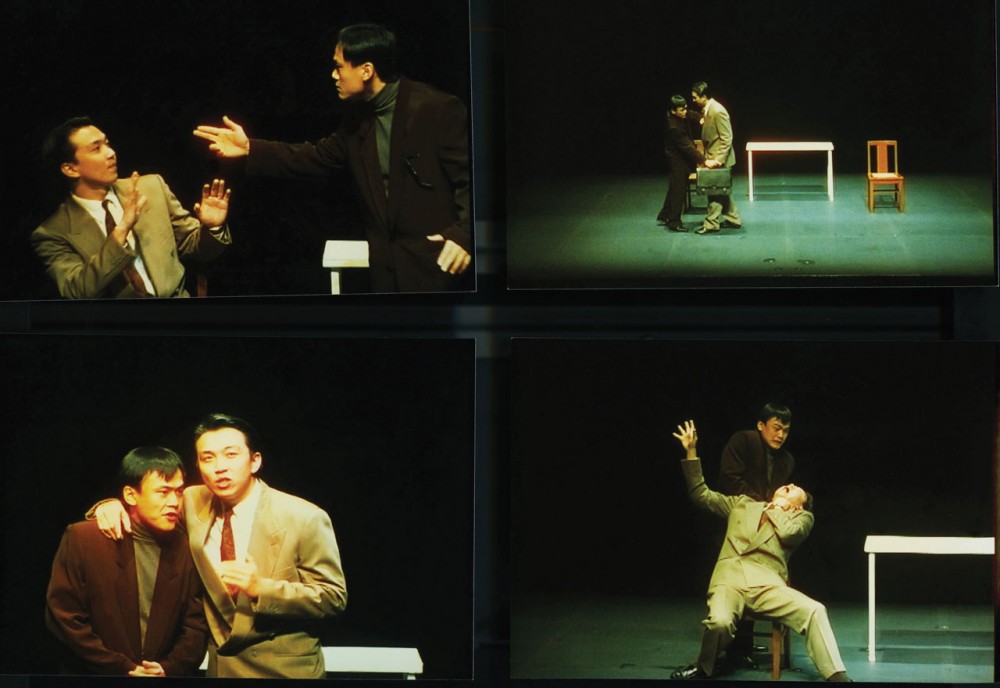 Edward Yang's creation for Journey to the East (1997)

We have commissioned several artists before 2000. But one of the most important commissioned works happened in 1997. In 1997, I invited six artists for One Table Two Chairs. They come from across the strait and border, two from Beijing, two from Taipei, two from Hong Kong. Even after 1997, this concept allows the various artists from this region to have more opportunities to see each other’s creative processes, and to comment and critique. So, pre- and post- 1997, Hong Kong plays an interesting role to facilitate cross-strait cultural exchange. In 1997, the discussion and interaction amongst the six artists were very important. They each come from different background. But the one who left an impression on me was movie director, Edward Yang. His work involves a conversation between two persons called, Lao Jiu and Ah Qi (if I remember correctly). His work established a crucial point that he was concerned about, and at the same time, responded to my commission during the pre- and post- 1997 period. The theme of his work is a response to the commission. Another artist, who is also a movie director, Stanley Kwan, borrowed the setting of One Table Two Chairs to illustrate his own coming-out experience. In his work, he successfully balanced movie and the concept of ‘peeking’ on the stage. Audience saw both a movie and lots of shadow play happening on stage. 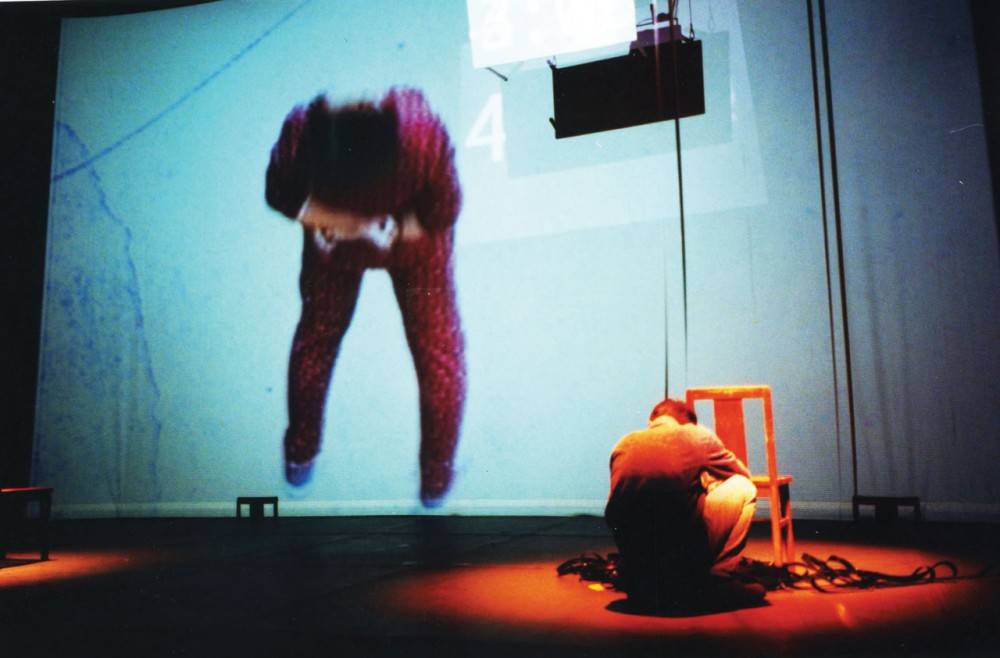 Stanley Kwan's creation for Journey to the East (1997)

So, Stanley Kwan is from Hong Kong, Edward Yang is from Taiwan, there is another artist called Lin Zhaohua from Beijing. He is one of those Chinese artists I have come to know who like to challenge the rules the moment they have the chance especially during crossover projects. Lin Zhaohua is the only artist who disregarded the 20-minute framework and came up with a 45-minute work, so I remembered it deeply. But we allowed his challenging of the constraints of the One Table Two Chairs setting, and allowed the work to be performed since he has already done it. Of course, we can discuss if his doing shows any disrespect to the other artists involved in the same project, or that the rest of us are more magnanimous in condoning his act. So these issues are for negotiation and discussion. 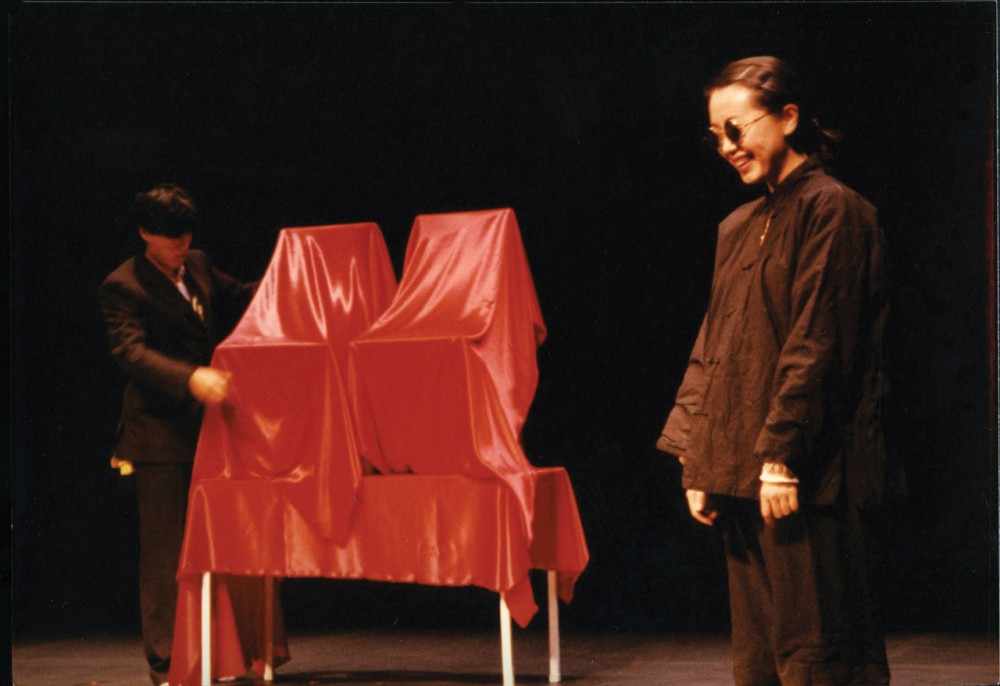 Lin Zhaohua's creation for Journey to the East (1997)

3. One of the main objectives of the One Table Two Chairs series is cultural exchange. As Hong Kong is a major producer of popular culture in Asia, is there plan to involve artists from popular culture, such as film/television actors, singers, internet personalities/celebrities, for this exchange? And, why?

You asked if I have plans to involve popular culture in the project. Earlier on, I mentioned Stanley Kwan and Edward Yang – they are movie directors. So I’d say they lean towards the popular culture. In other disciplines, I remember an artist from Hong Kong, Wong Shun-kit, who produced a stage performance. His background is in visual arts. In considering whether or not One Table Two Chairs is used to cross boundaries… First, we have crossed cultures. I have also mentioned that before and after 1997, we have crossed the borders of Mainland China, Hong Kong and Taiwan. Subsequently, in the year 2000, we crossed Asian and European cultures. And in between 1997 and 2000, we attempted to traverse different forms of artistic expressions, such as visual arts, film art, video art and other forms of art. I feel that traversing boundaries is very important; it allows for more critical thinking; it compels us to look inwards to become more aware of who we are, where we are coming from. Traversing boundaries is critical in the creative process of One Table Two Chairs projects, especially so in a collective environment. That, and exchanges between people. 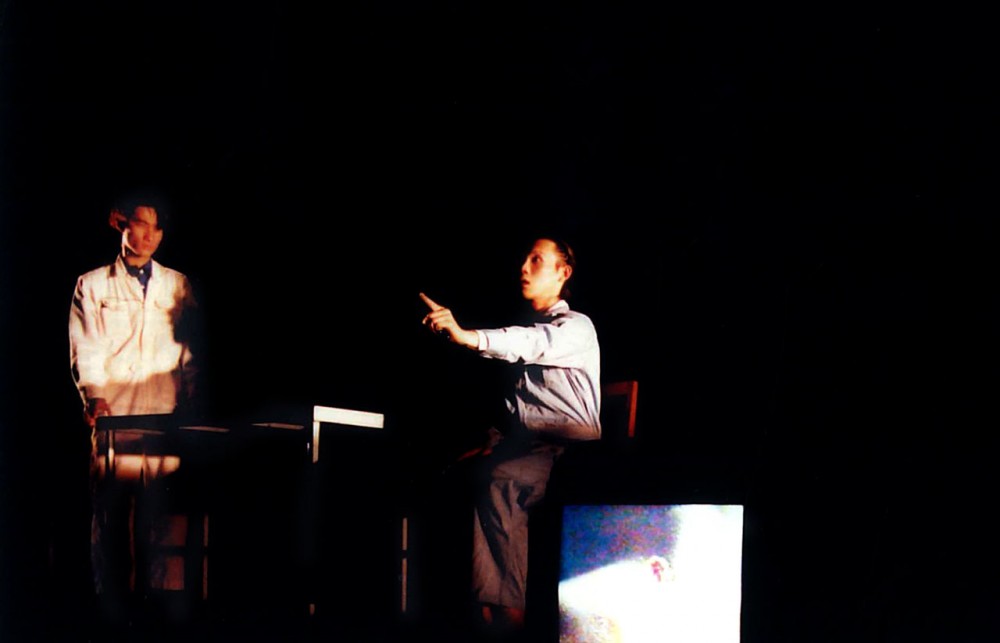 Wong Shun-kit's creation for Journey to the East (1998)

4. In today's world, communicating with each other is easier due to technology advancement. Has this trend made cultural exchange more convenient? Or are we clouded and deceived by the massive amount of data generated every day? Is national border an obstacle in cultural exchange?

I’ll answer the last question first. I think the answer is yes. That is why I insisted that we should discuss exchanges between cities, instead of between countries, because a city is already a conglomerate of cultural influences. A cultural exchange between two cities allows us to explore the immediate challenges that we are facing right now, whereas the exchange between two countries often ends up to be about boundaries – I’m on this side and you’re on the other side. So, during pre- and post-1997 period, I recommended that we put our focus on cultural exchanges between cities, and use “city” as a basic unit when talking about (cultural) exchanges.

Fifty years ago, one wishes to be able to communicate with another person clearly. Fifty years later, being able to communicate with one another clearly remains just as important, although in the past, the mode of communication was letter writing, and then we have the telephone. Now, we communicate via the computer or mobile phone. Regardless of the modes of communication, the contents are just as interesting. So when everyone has a communication device in his or her hand today, does it affect the way we communicate? If I asked you the same question 200 years ago, when everyone was writing letters to each other, did writing letters affect their communication? Writing letters allow us to document our thoughts, and some feelings. We achieve the same objective when we talk over the phone: the nature of our conversations; the feelings and opinions expressed. Technological advancements, on the surface, seem to have made things more convenient. But the relationship people have with each other is something that technology cannot change.

Read Part 1 of the interview here.

This interview is made possible with support of Sense Connect and Zuni Icosahedron.

Danny Yung participated in Southernmost: 1 Table 2 Chairs Project in Singapore in December 2017. Find out more about the project here.