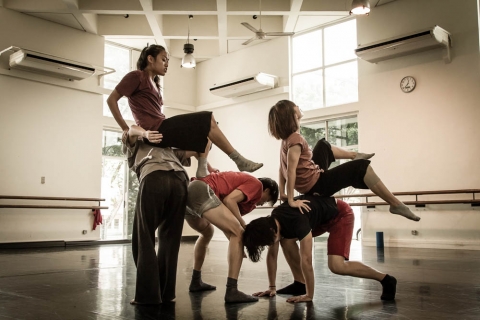 T.H.E Dance Company is concluding their 5th anniversary celebrations in September with New Vision, a triple bill that showcases their exploration in new artistic territories. We spoke to the choreographers – Kuik Swee Boon (founder and artistic director), Zhuo Zihao (founding member) and Jeffrey Tan (recently appointed associate artist) about the company’s five-year journey, responsibilities of being the ‘top contemporary dance company in Singapore’, and the aspiration to achieve new heights in artistic excellence with new techniques and technology. 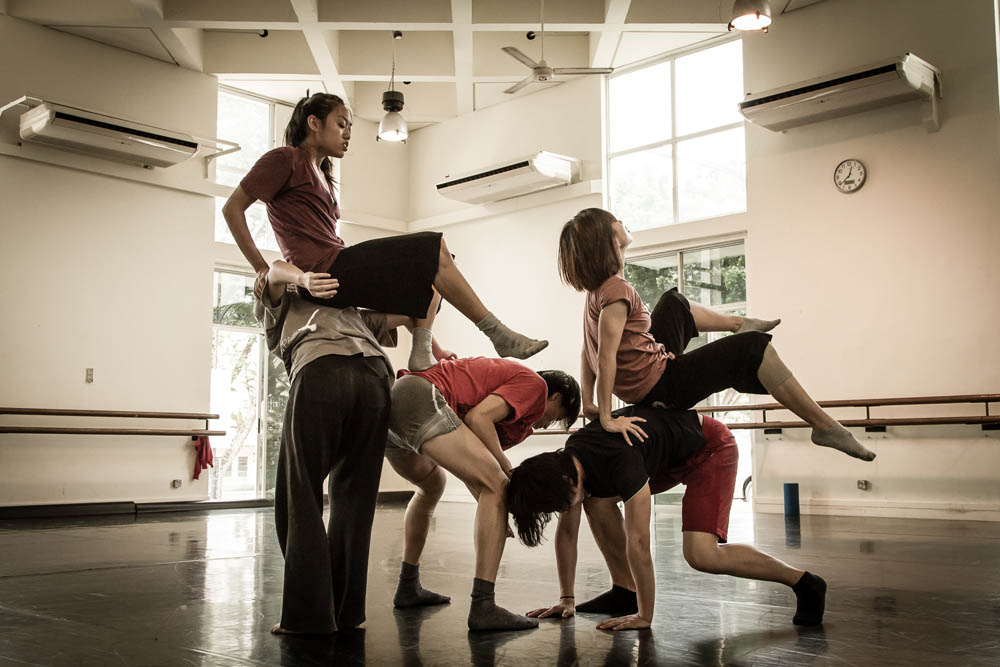 Congratulations on your 5th anniversary! It must have been a fruitful five-year journey of artistic discovery that inspires T.H.E Dance Company to explore new artistic territories.

Tell us, what are the company’s most significant discoveries in terms of critical reception and audience expectation? What are the anticipations of the society that have helped the choreographers shape their creations in New Vision and future performances?

Kuik Swee Boon: In terms of critical reception, we still face this persistent problem in Singapore of not having enough qualified reviewers. I think it’s ideal that we have at least 3 or more reviewers for one performance, because at the end of the day, reviews are a reflection of personal opinions and agendas that can run positively or negatively – thus affecting the response to the production either way.

As for audience expectation, one of the key challenges we face is in reaching out to a larger group beyond our niche audience, and cultivating their appreciation of the original dance works we do. I feel that audiences today seem to be more concerned with chasing the latest trends; they’ll only watch whatever is popular. In turn, this creates pressure on us to adapt our works according to popular taste. For instance, when Jiri Kylian’s works became extremely popular, you’d see numerous companies attempting to recreate that style. As such I’m consciously and continually fighting against this; I feel that there’s room for a diversity of styles in the dance scene, and is in fact a necessity, in order to create unique and original works.

To me it’s a matter of perception and respect. When society comes to respect the work of the artist, they then perceive his/her role as a proper profession. In turn, the artist becomes much more serious and dedicated to his/her profession. The key thing here is the element of respect that needs to be established. As for the society as an arts-going audience, there is definitely greater maturity and appetite as people are increasingly exposed to various forms of arts in Singapore and overseas. Many have embraced the concept of multi-disciplinary art, which broadens our space for exploration and creative risk. This encourages us as we take on a more experimental direction in our work, particularly when the investment of time, effort and cost is pretty high in productions that incorporate technological equipment, such as New Vision.

Despite a short history of 5 years, T.H.E Dance Company has frequently been described as ‘the top contemporary dance company in Singapore’. What are the success factors? Holding this status and reputation, what responsibilities do you feel the company should uphold towards Singapore’s arts scene and the society?

Kuik Swee Boon: There’s no magic recipe for success to this (laughs). It’s an accumulation of things – small, imperceptible things such as the dancers growing in strength and maturity; pushing for every single ticket to be sold; the performance satisfaction and audience enthusiasm at every curtain call; these are things you can’t actually see on a daily basis, but realise only after years of hard work and commitment.

It’s thus a great honour to be recognised by our peers and audience. Contemporary dance places the individual at the fore, reveling in the freedom to celebrate the quirks that make one human. This recognition further affirms the values and convictions that we’ve stuck by and has allowed us to avoid being swept up by trends and fads. We’re more certain than ever of what we stand for and how we want to present ourselves to the audience – at the heart of it, it’s the love of contemporary dance and an acceptance of its myriad styles, expressions and forms that we wish to promulgate.

The works (and the name) of the company place great emphasis on the human element in dance, which is a major feature that sets the company apart from other dance companies. How do the dancers equip themselves with the ability to accurately and effectively portray human expressions and emotions?

Kuik Swee Boon: Working as a group inhabiting a common space, even though we don’t necessarily share our personal lives with each other, we work with a shared understanding of common values and beliefs, particularly in that of the company’s. Dance is not something that is simply taught in a classroom, and thus our training is not mere physical group activity; we try to find qualities in the movements that resonate within us, as humans, and working with people who can recognise the same attributes is an important part of this. Most of all, I think the dancers extend this empathy and sensitivity to their daily lives and relationships outside of work, which allow greater depth in their thought process and therefore performance.

Do you think technology is going to be an inseparable element in performing arts? Has technology made enough advancement to play a major role in artistic creation? Are artists ready to take advantage of technology to elevate artistic perfection?

Zhuo Zihao: Technology has always been part of performing arts creations. It is just that the emphasis has not always been on the former. In my opinion, it is also that few artists have questioned why certain technologies exist, how they have evolved, and how the characteristics and nature of technology can help enhance the messages intended to be delivered in a work. So far, many works I’ve seen merely use media or technology in a supporting role – to show things that the usual practiced medium can’t fully articulate, or worse; to create gimmicky effects or a wow factor, which basically serves no artistic purposes.

I want to go beyond these. So I’ve used 3D visuals to draw audience perspectives closer to the work and at the same time to blur virtual reality from tangible reality – namely the live performers who are dancing on stage. This is the original purpose of 3D visuals anyway, so the audience will have to put on 3D glasses! Another uncommon medium I’m using is 3D sound. This paints an almost physical soundscape by utilising sound frequencies to affect one’s experience of the piece – in this case, the piece is about trauma. So you can understand the choice and purpose of what I’ve used.

Technology is always ever advancing in its own context. It is only because of the lack of emphasis of technology in the arts that they don’t really evolve within this setting. Technology can definitely play a major role in arts creation. Look at the photographic form, for instance. The camera has evolved from a heavy analog device to being installed in every mobile phone today, making every mobile phone user a potential artist in his or her own right.

I can’t tell you if artists today are ready to take advantage of technology. I mean, yes, they might benefit from the wow factor that technology can provide, but to take real artistic advantage an artist has to really, deeply understand technology. At the end of the day, when you are watching a work that fuses elements of technology, you should be able to forget or not be able to see that there are differences between the mediums. You should be drawn closer to the artistic message of the work as a result of the characteristics of the technology.

Jeffrey Tan: Yes, I think technology will become an inseparable element from the performing arts. Humans create art, and we are increasingly reliant on gizmos and gadgets such as our mobile phones, television, computers and the Internet – inevitably this will find its way into the art we produce. Technology has evolved to become a constant in our lives, such that it is now one of the most accessible tools for artistic creation.

For me, it’s not so much about whether we are ready to take advantage of technology, but whether we’re ready for how unyielding technology can be. As much as we plan and rehearse in advance, there’s always the danger that the equipment could trip up or give out, and unlike working with a live performer, you can’t ad-lib and adapt to the situation. That’s another challenge there; because it’s so unyielding, the human user or performer must always be the one that works around the technology, which gives us less control than we think. Then there’s the issue of cost, which determines the type of equipment and level of technology you can use. A smaller budget inevitably leads to a downsizing of your vision and its execution.

Another discovery when working on my piece Command Pattern was how delicate the balance between showcasing the live performance and technology was. The performance element can easily get overwhelmed by the technology, so I had to use a storyboard to work out scene-by-scene, what the focus of each segment would be and how I could play up one or the other element to draw the audience’s attention. It also reflects to some extent the themes that I’m exploring with Command Pattern, whether humankind can truly live without technology despite the growing awareness that we’ve become over-reliant on the latter and desire to return to simpler times.

Tell us more about the collaboration between the choreographers and renowned local musicians Bani Haykal and Tze Toh. Does the collaboration spark creativity and create new substance and dimension on top of the original ideas ofNew Vision?

Zhuo Zihao: Collaborating with Bani definitely brought about many more new ideas. I’m lucky that Bani is also very much into researching other technological way of presenting soundscapes. Our work together has evolved from the initial stage of just wanting to play around with 3D sound, to now venturing into playing with directional sound and the effects of having a music composition made from adopting different sound frequencies.

Jeffrey Tan: It’s my second time working with Tze for a dance performance – the first was also a piece I choreographed for T.H.E, titled Remains Remain (2012). However because this piece is much more complex than the last, it required a lot of discussion and precise communication of what I wanted from Tze. We had a few disagreements initially, as Tze’s also an artist and he’s got his own unique take of how the music could be shaped around the choreography, which is good because the piece ultimately benefits from the input of different creative perspectives.

A key characteristic we discussed in this ‘man vs. technology’ debate was that the music shouldn’t pander to the stereotype that technology is immediately represented by harsh, robotic rhythms, and that man is always represented by fluid, soft melody. Tze watched a number of the rehearsal sessions to come up with an organic blending of sounds that would accurately depict the complexity of this struggle. 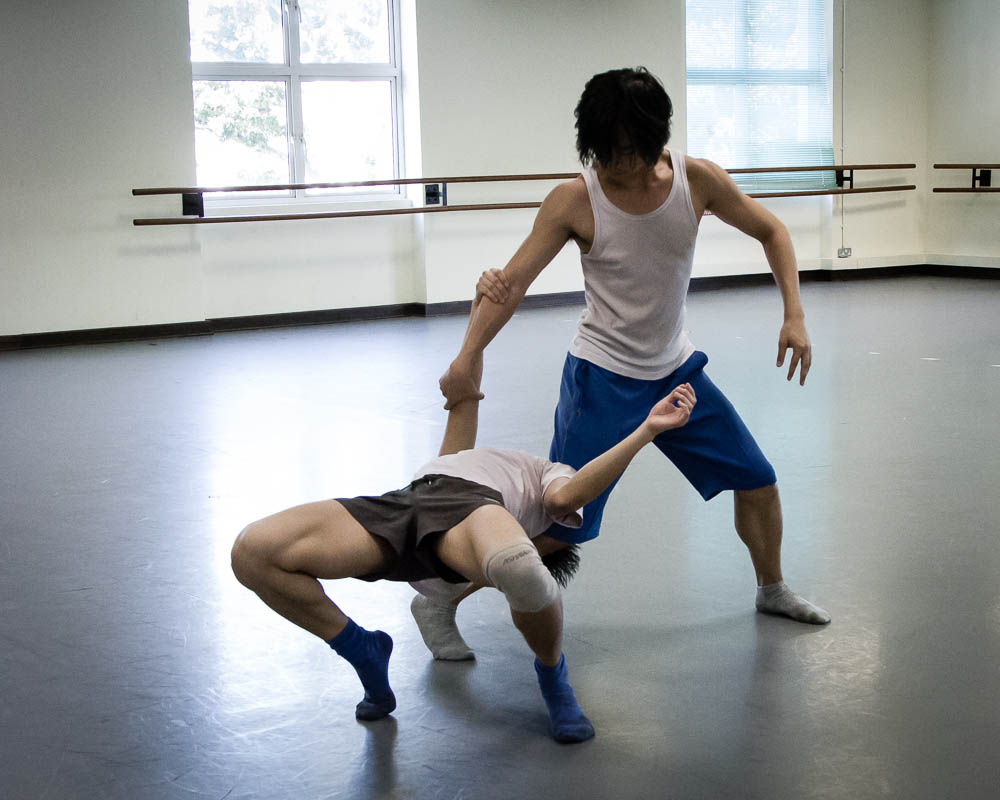