Interview with Chng Yi Kai - What really happens with time? 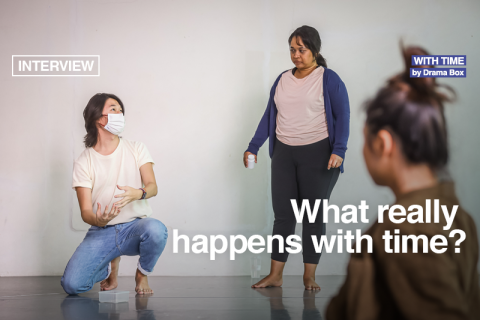 Drama Box’s resident artist Chng Yi Kai is presenting his directorial and playwriting debut, With Time, to explore and unpack what it means to overcome suicidal thoughts and attempts. It features real stories of people who had tried to end their lives in their youths. It is also the second show by Drama Box this year that deals with the issue of mental health and suicide. Dancing with Fish in the Midnight Zone, performed in June and screened online in July, was written and presented by Drama Box's youth wing ARTivate, whom Yi Kai was mentoring.

We spoke to Yi Kai to find out more about the creative process of this work, and his journey as a young artist in the scene. 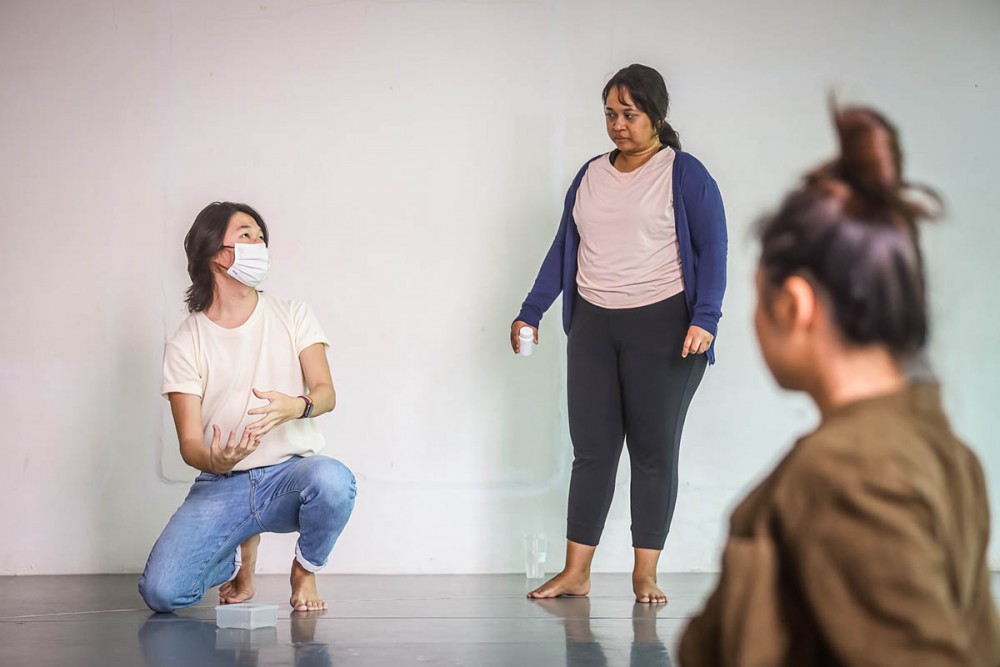 1. You have chosen to use the 'verbatim theatre' form for this production. What do you think the form can achieve, for you — the creator, and for the audience?

I started off wanting to look for and present real, honest stories. I was responding to the observation that a lot of mainstream narratives have framed stories of overcoming suicidal ideations as a success (or not). But what are the nuances of this journey? How would the individuals who have been through the journey articulate this ‘recovery?’ Do they think of it as ‘getting better’, or how would they describe it?

I am hoping that the ethnodramatic form of verbatim theatre can give us some honest answers to these questions, so we have a better understanding of mental health, suicide and ‘recovery.’ With Time was originally created for youths, so the interviewees in the piece have all been through some level of suicidal ideations since they were teenagers or younger. The idea is that these stories from the youths (or rather from those who have journeyed through their conditions since their youths) can remind the young audiences of the possibilities of their journeys ahead.

2. You mentioned that using the theatrical experience allows you to create a safe space to facilitate meaningful conversation. What does safe space in theatre 'look' or 'feel' like?

I would say it is a lot about the critical distance between the audience and the theatrical experience.

When we unpack or talk about the stories of a performance, we are also talking about the larger issue and the world that surrounds it. A lot of times it is about our own experiences too. However, it doesn’t feel as confrontational as if we were to talk about the issue directly (without a theatrical or fictional setting).

For instance, Augusto Boal has talked about Forum Theatre as a “rehearsal for life.” In trying out different situations in the forum theatre piece’s scenarios, and then unpacking it, the audience is mainly focused on the character and the story. But as we discuss the stories, we are also relating it to our own doubts, questions or assumptions - like rehearsing for similar scenarios in our own lives. Yet it still feels less head-on, because we are talking about the stories, and not really ourselves or one another.

When we use stories or performances to springboard conversations, the idea is to maintain this distance between the 'fictional' world and the audience’s own private lives, giving all of us a malleable space to talk about a potentially uncomfortable issue without fearing judgement from others.

3. You were the mentor for Drama Box's youth wing, ARTivate, who recently performed Dancing with Fish in the Midnight Zone — a production dealing with issues of mental health and suicide. What have you learned or discovered from this experience?

I think I learnt most about the day-to-day ‘practice’ of looking out for our mental health. Stories of mental health or suicide can get quite heavy for some, so I have also been thinking a lot about how to provide enough support for the audience, and for everyone in the team.

Learning from the ARTivators, I think it is a lot about building a community of support for ourselves, and organising resources around us. It is about communicating and checking in with one another constantly, so that we can be aware and open about our own mental wellness. So I try my best to set up this ‘work culture’ in my rehearsal space, as much as I can. The ARTivate production also got me to think about setting up a decompression area for the audience to step out of the experience if they would like to. We have also arranged for staff members of the Samaritans of Singapore (SOS), who have kindly agreed to assist us, to be stationed there to speak to any audience member who may need it. 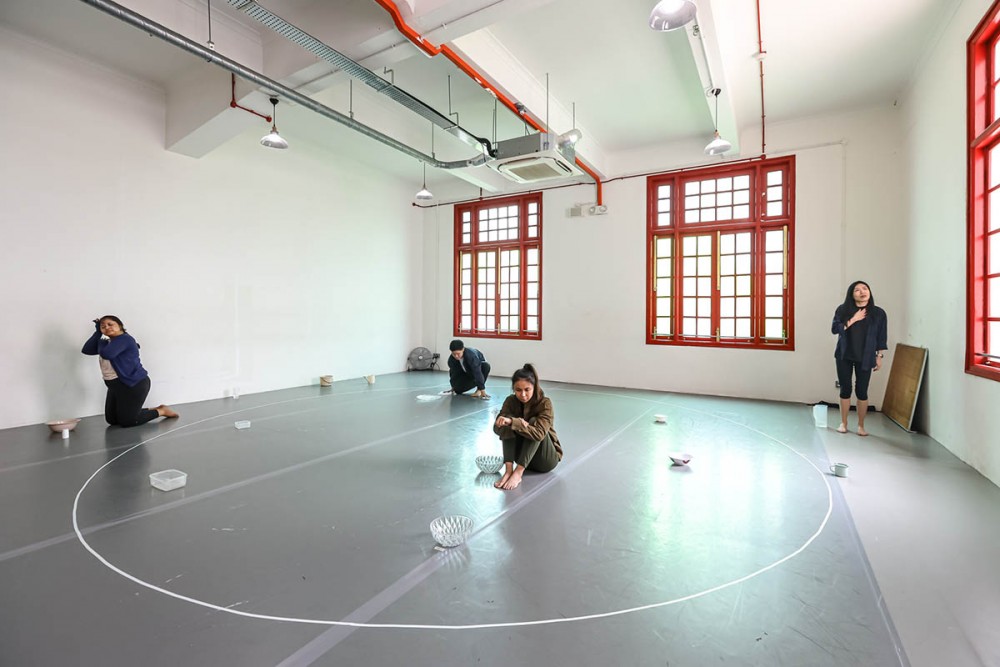 4. You shared that the experience of studying archaeology got you to think deeply about 'time'. What does 'time' inform you about theatre, art and/or this project? What 'role' does 'time' play in this production?

Theatre, or rather, any performance, is fundamentally working with time and space. On stage, we can traverse from the past to the future, back again, with just the change of a lighting state or the transition of a body posture. That’s the magic of performance, right? So I am curious as to how we can take this aspect of theatre and expand it to understand our world better.

In With Time, I am also responding to this common saying of how ‘things get better with time.’ People who face mental health struggles often receive this from others, too. But what does that really mean? What really happens with time? Do we do something with it, or do we just wait?

Fundamentally, time is experienced differently by everyone in different struggles; that’s the politics of time. For instance, for some who live with deep mental health conditions, time can feel excruciatingly slow when they are in pain. Or some do not see much of a future, so they feel there is just no meaningful ‘time’ ahead of them. So the verbatim performance uses 'time' as a lens through which we can understand the journeys of recovery, or rather, the journeys with time.

5. From the time you joined the drama club at primary 5, to the moment the curtain opened on the stage of Nine Years Theatre's Art Studio (which you're part of) in 2017, to this day when your directorial and playwriting debut is opening in a few weeks' time, how has your perception of 'theatre' changed?

I feel like this could be a whole other conversation! I think it really went back and forth a little... I think I find myself thinking quite a bit about the impact or functions of arts, and why I want to do it. When I started in drama clubs in schools, it was just to have fun and enjoy playing different characters in various stories. Then when I studied Applied Drama (in Singapore Polytechnic), I realised the art form can do so much more than just entertain, where it can achieve very meaningful or specific objectives.

After which, I must be honest that I began to be less generous towards works that don’t aim for such larger objectives. But I have learnt that was a very bad attitude. Now, I am much more open to all forms of arts. Because arts or theatre should be as open as it would allow, and all forms of arts are just as valuable. Art doesn’t exist just for functional reasons, although it harnesses certain intrinsic values that can veer towards achieving certain objectives. Who is to say 'pure entertainment' cannot also be ‘applied theatre’, but just in a different condition or context?

To quote the philosopher Alain de Botton, “… art has the power to extend our capacities beyond those that nature has originally endowed us with. Art compensates us for certain inborn weaknesses, in this case of the mind rather than the body, weaknesses that we can refer to as psychological frailties.” The way I see arts and theatre now is that it is a ‘gift’ (also quoting Helen Nicholson on the ‘gift of theatre’) that accepts our fallacies and extends beyond them. And it is fundamentally up to us to give this ‘gift’ to whomever, however or whenever we deem fit. But of course, this perspective may also change again...

6. What do you do when you're not spending time in the theatre?

I love to eat. If I have the time I do like to go to specific places and spots to try new food, a lot of times with my family, who are also foodies. And I usually crave most for sweet stuff, like desserts, ice creams, cakes, pastries, etc! But when I don’t have time to explore, there will always be bubble teas around the corner :)

Chng Yi Kai is a budding artist who aspires to create effective means of engaging the community through art. A graduate from Yale-NUS College with a major in Anthropology, his foray into theatre began with joining the second cohort of Drama Box's youth wing ARTivate, after graduating from Singapore Polytechnic's Diploma in Applied Drama and Psychology.

He had participated as an actor in some of Drama Box's projects, including Bus Stop, Confessions and Exit, and as project manager on Kopitiam and installation and photography artist on IgnorLAND of its Loss. Yi Kai's acting credits also include Art Studio, the Singapore International Festival of the Arts 2017 festival opener by Nine Years Theatre, and KNOTS by STRANGER, at the New Works Festival 2019. He is one of the founding members of theatre collective STRANGER.