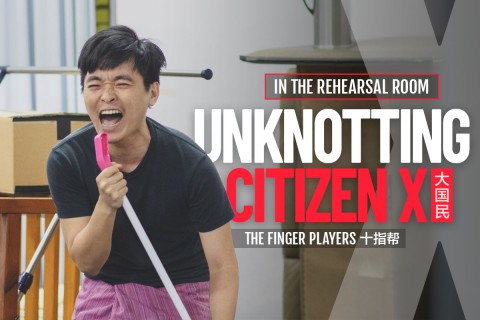 The rehearsal starts with the thud-thud-thud of an inflatable ball as director Oliver Chong draws a string across the room and plays a friendly game of modified tennis with playwright/actor Liu Xiaoyi. (They serve with their hands instead.) Xiaoyi warms up by rattling off random lines and passages off his head while running about the rehearsal room, returning the ball to Oliver's court. Like a metronome keeping a momentum, Xiaoyi returns each serve with a passage, his recitation of lines in tune with the rhythm of the bounces. Both of them rarely misses a beat, rarely misses a ball — the same can be said about the way they rehearse, bouncing feedback off each other, not missing a beat. It has gotten really enjoyable to watch one antagonise the other, sending challenging serves across the rehearsal space. Presence, muscular memory, mindfulness, focus. Generally, Oliver takes command of the space, the momentum of the warm up match, pace of the scenes, and Xiaoyi, looking perpetually goofy, adjusts his energy to match up. 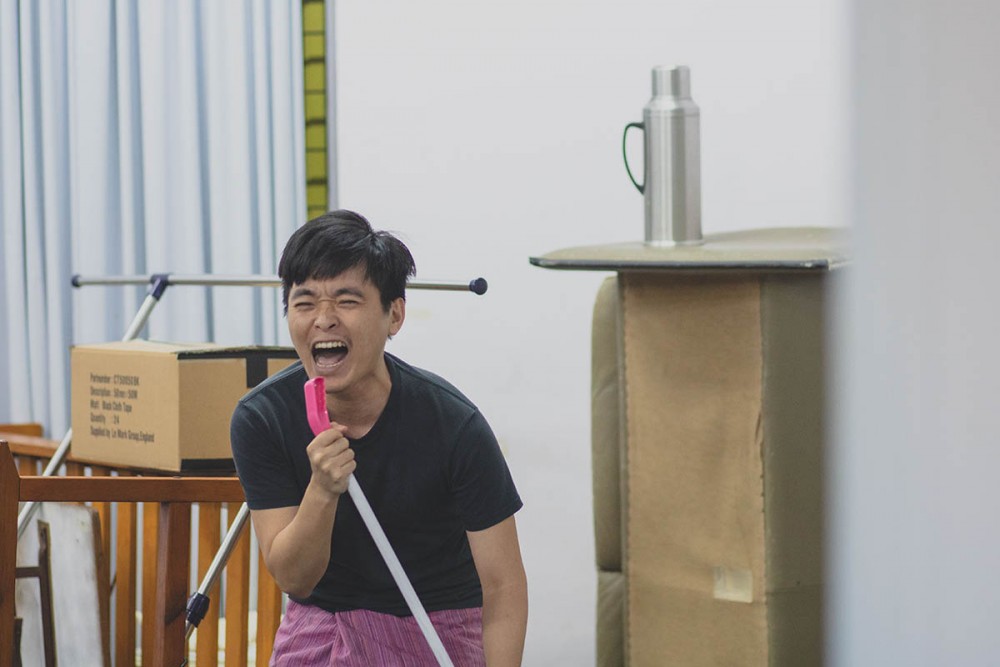 On hindsight, the evening’s schedule is pretty hectic for the actor. After the warm up, we move into scene work, where we catch a glimpse of the layers or varying intensity of emotions that goes behind each character that Xiaoyi moulds. And then there’s a full run of the script.

We caught three rehearsals the weeks before, took a week’s break, and we are promptly treated to the stark progress in character work today. Lines that belong to three seniors in Xiaoyi’s script no longer feel alienated, the sounds of each Teochew syllable no longer sound rigid to me, one sound rounds into the next, like gentle waves colliding onto the next, until they crash gently onto the shore, and take their time to recede.

The play has been built upon a series of interviews that Xiaoyi (and Oliver) has done with his relatives back in his hometown, Jie Yang. We find out that he has kept most of the dialogues verbatim, hence many paragraphs are performed in Teochew. Xiaoyi mentions that the challenge was what to do with these interview materials, and how to string these dialogues together to find a dramatic tension in the storytelling. We laugh and remark that Citizen X to Xiaoyi is not unlike Roots to Oliver. Naturally, we are curious about the difference between directing himself in Roots and directing Xiaoyi. Oliver exclaims, “Of course it’s much more fun and enjoyable to direct Xiaoyi! And also less lonely...” Oliver affirms that Xiaoyi is a diligent actor, who does his homework before coming to each rehearsal. He jokingly adds, even if he didn’t do his homework, Xiaoyi’s probably smart enough to be able to keep up a front.

Not long after the show starts, Xiaoyi breaks into a song, one immediately sees his goofiness. But as the show progresses, air thickens, the mood becomes solemn. Xiaoyi seems to find out less and less about his grandfather, but more and more about himself. He digs deeper into his relationship with his father. One also realises that the dialogues between him and his father are fully performed in Teochew. In a way, I feel this expresses the intimacy between the pair, and acts as a kind of privacy screen, the audience is not immediately privy to their conversation.

Citizen X brings the audience on a journey of self-discovery with the protagonist — Xiaoyi himself. He makes an incidental discovery that his grandfather had similarly journeyed down south to the sunny island of Singapore 70 years before he did. This triggers Xiaoyi’s quest to retrace his grandfather’s voyage. What was his motivation coming to Singapore? What did he do here, and what made him return to China shortly after 2 years? In his investigation of the status quo, will Xiaoyi uncover the choices that led him on his path in life..? 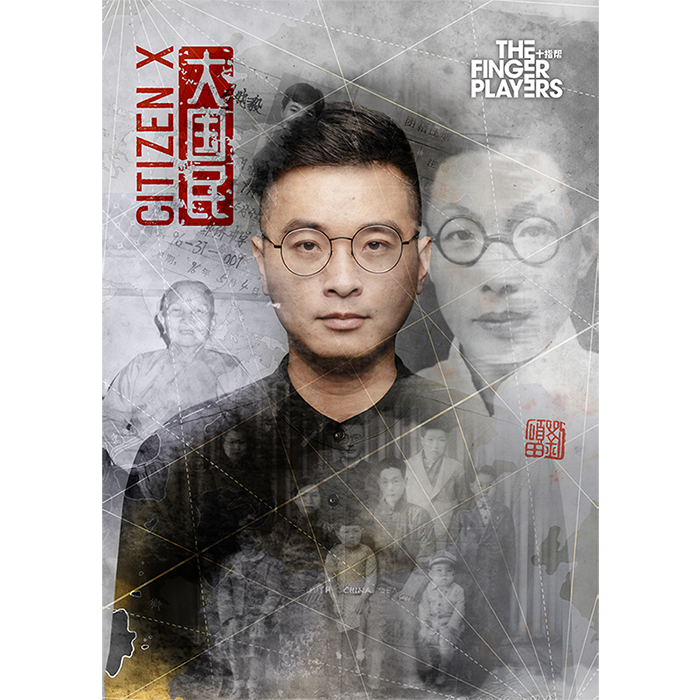